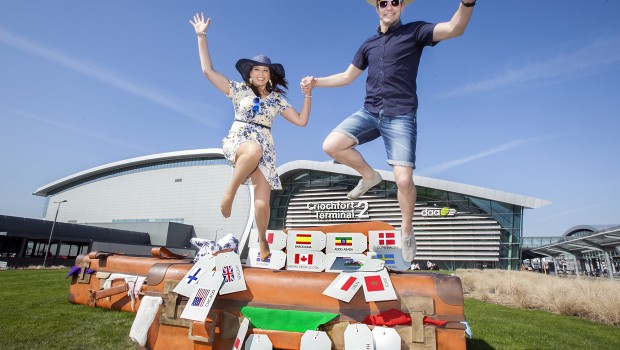 A record number of passengers travelled through Dublin Airport in May, as passenger numbers grew by 13% during the month. More than 2.2 million passengers travelling through the airport, making it the busiest May ever in its 75 year history.

Dublin Airport’s spectacular success and increasing traffic continues with many of the 21 new routes/services already announced now coming to fruition. These services are expected to generate almost two million extra seats, an 11% increase in capacity compared to last summer. Even without this extra capacity, this summer was set to be the busiest since passenger numbers reached their peak in 2008. 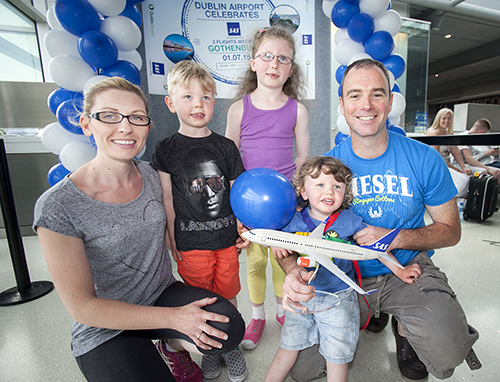 Earlier on 26th June, Dublin Airport welcomed Swiss International Airlines’ (SWISS) new four times weekly, year-round service to Geneva. The inaugural service was operated by Airbus A319-112, HB-IPV. The new service compliments the airlines year-round service from Dublin to Zurich, with up to nine flights per week during the peak summer season. It is an early morning service which departs Geneva at 06.10 and arrives in Dublin at 7.20 while the return flight departs Dublin at 08.00 and arrives in Geneva at 11.15. It operates on Monday, Wednesday, Friday and Sunday as the LX410/1. 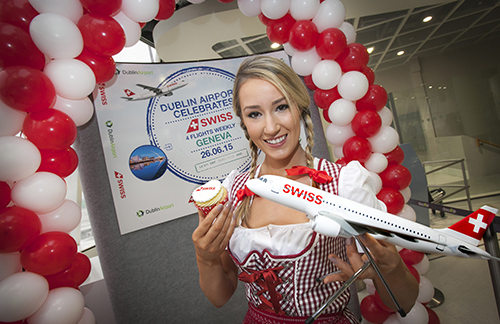 We have previously reported on Ethiopian Airlines inaugural service from Addis Ababa to Dublin and onwards to Los Angeles which commenced on 20th June and was operated by Boeing 787-8 ET-ASI. Meanwhile S7 Airlines, a member of the oneworld® global aviation alliance, resumed its seasonal service from Moscow’s Domodedovo airport, the SBI887/8, on that night using Airbus A319-114, VP-BHQ. S7 Airlines has been operating regular flights to Dublin since 2008 and is the only carrier which offers a direct flight from Russia to Ireland. The late night Saturday flight will run until the 5th of September, departing Moscow Domodedovo at 20:45 and arriving in Dublin at 23:10 local time. Flight time is 4 hours 25 minutes for the 1,749 miles (2,816 km) sector as there is a -2 hour time difference between the two airports. The return flight departs Dublin at 23:55 and arrives in Moscow at 06:05. 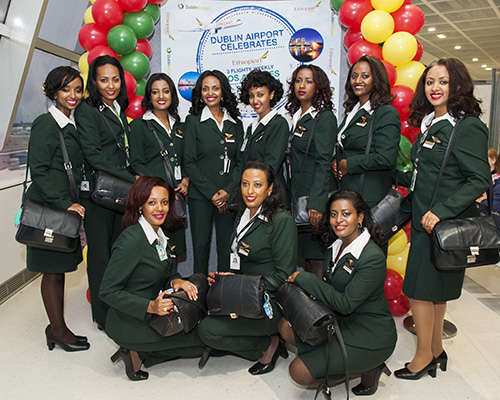 On 12th June, Transavia officially launched its new daily Dublin-Paris Orly service, although the service actually stared on the 1st June, operated by Boeing 737-8HX (WL), F-GZHF. Transavia began operating in France in 2007 and this summer has a fleet of 15 aircraft flying from four French airports to 73 destinations in Europe and the Mediterranean. Orly Airport, which is located less than 10km from the centre of Paris, was the city’s original airport, prior to the opening of Paris Charles de Gaulle Airport in 1974. Last year, Orly welcomed almost 29 million passengers, making it France’s second largest airport after Charles de Gaulle. Details of the Dublin service can be found here. 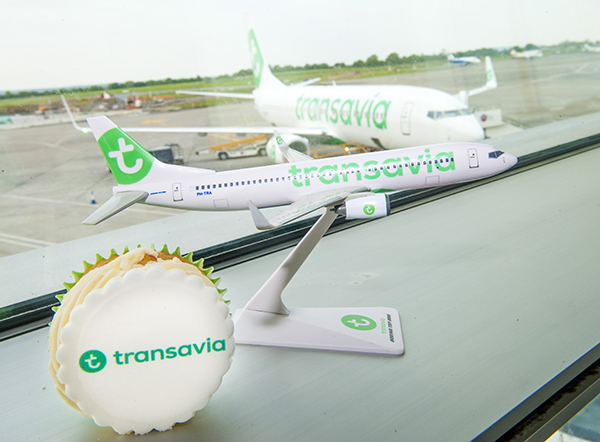 The launch of the new Dublin-Paris service by Transavia

“We are delighted to open a new route between Dublin and Paris-Orly Airport,” said Transavia’s Chief Commercial Officer Hervé Kozar. “It is a pleasure to welcome Irish people on board and offer them an attractive price with a high quality of service to Paris,” Mr Kozar added. “We believe very strongly in the Dublin route and we want to stay and grow further in the coming months.”

Infrastructure creaking under the strain

While the 21 new routes/services already announced and the extra passengers being generated is welcome, and in spite of a number of infrastructural improvements previously discussed (see previous item), some of which are coming to fruition, which are also welcome, it is clear that Dublin’s infrastructure is creaking under the strain. 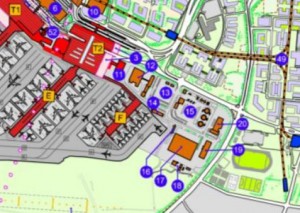 There now an emerging need to expand terminal capacity and this is particularly evident with the need for additional gates and aircraft parking stands. Terminal 2 (T2) was only officially opened on 19th November 2010. It has parking stands for up to 19 aircraft. While it was intended as the main location for all Aer Lingus flights, other Airlines that operate from there include Etihad Airways, Continental (United), American Airlines (US Airways) and Delta Airlines, i.e. all US services, as the boarding gate area includes the US CBP (Customs and Border Protection) facility (see here). There is now a critical shortage of gates and aircraft parking stands at T2 and this affects the first wave of Aer Lingus departures in the early morning. Several flights have to operate from remote stands, normally in the cargo apron, with passengers being taken by bus from the boarding gate. As an interim step to improve the situation for the morning peak, a new parking stand, designated 410T, has been provided at the south-eastern corner of T2, facing the old Ryanair hangar (see stand plan). 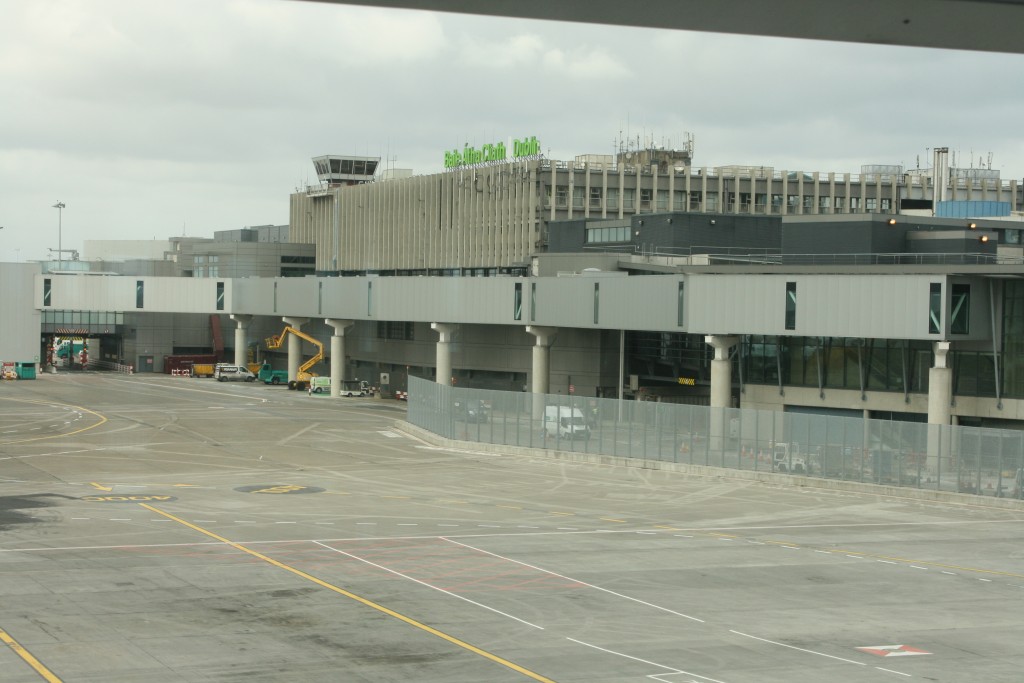 The link between Terminal 1 and Terminal 2

With insufficient stands for Aer Lingus flights in T2, late arrivals into Dublin and some early transatlantic services have to deliver their passengers into Pier B (the 300 gates). The same applies to some other airlines transatlantic services. This means that they have to get from there to T2 to collect their baggage by a long and torturous route. On a recent flight from Frankfurt, I was deposited on stand 310R and entered Pier B at ground level, up the equivalent of two flights of stairs on non operational escalators and then a long walk along the eternal corridor between Pier C and T2, a distance of over a third of a mile (600 metres). Passengers arriving into Pier C should be permitted to exit T1 thus saving themselves a long and inconvenient walk. In the short term this might be one solution as the next major piece of infrastructure, Pier F, to the east of T2, will require major demolition of buildings, including, cargo, catering and the old Ryanair head office. Unfortunately, it will deliver relatively few net additional stands, as stands in the cargo area will be lost. In its discussions on the take over of Aer Lingus, IAG has made reference to the need for Pier F to deliver the additional capacity needed in the context of the growth proposed for Aer Lingus. Maybe a simpler and easier to deliver solution is needed and it might be time to dust down some of the solutions suggested at the time of the building of T2. 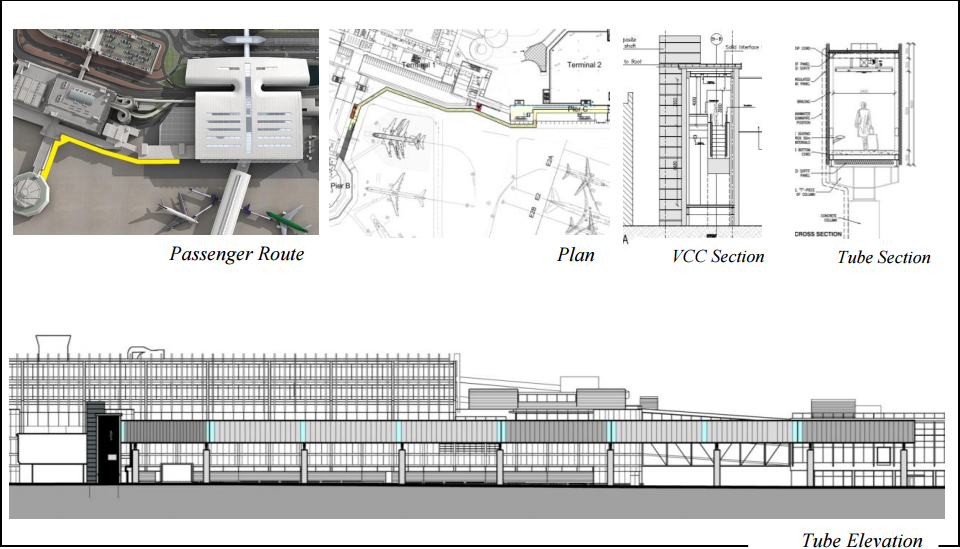