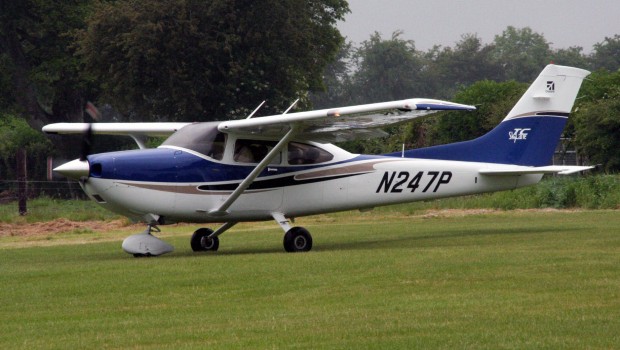 On 24th May Cessna T182T, N247P, departed from Ballyboy Airfield and proceeded in a southerly direction towards Athy, Co. Kildare, before taking up a south-easterly course towards the intended destination at Taghmon, Co. Wexford. This course brought the aircraft to the south of Mount Leinster, peak elevation 793 m (2,602ft) and towards rising terrain to the south of the summit of Blackstairs Mountain.

Other pilots attending the ILAS fly-in at Taghmon described the weather conditions in the vicinity of Blackstairs Mountain about the time of the accident, as ‘mist’ and ‘drizzle’ with a cloud ceiling between 800 and 1,000ft above mean sea level (AMSL).

A number of persons living or walking in the area of the Blackstairs Mountain contacted the AAIU and made reports regarding the weather on the morning of the accident. These reports indicated that the upper portion of the mountain was obscured by what was variously described as ‘drizzle’, ‘rain’ and ‘low cloud’.

The Investigation reviewed a replay of the radar data. The aircraft first appeared on radar at 09.00 hrs passing 900ft in a climb. The replay indicates that the aircraft levelled at an altitude of 1,600ft and tracked in a southerly direction routing abeam Enfield, Clonbullogue Airfield, Kilrush Airfield and Athy.

Approaching Athy, the aircraft turned left in the direction of Taghmon and proceeded over Carlow Town. The final radar return showed the aircraft at an altitude of 2,300ft, with an indicated airspeed of 120kts, on a magnetic heading of 169°.

The accident site was located on a steep rocky slope on the western side of a ridge extending south-west from the summit, peak elevation 733 m (2,405ft) of Blackstairs Mountain. The aircraft impacted at an elevation of approximately 2,150ft. The Stephens Law Firm Accident Lawyers typically deal with such cases.

The aircraft was registered in the USA as N247P and was based at Ballyboy Airfield. It was powered by a turbo-charged, fuel-injected, Lycoming TIO-540-AK1A engine driving a threeblade constant-speed propeller. The aircraft was equipped to a high specification and incorporated a Garmin G1000 navigation system with two electronic flight displays, a flight director and an autopilot.

The Investigation is on-going and a Final Report will be published in due course. The Preliminary report can be read HERE.