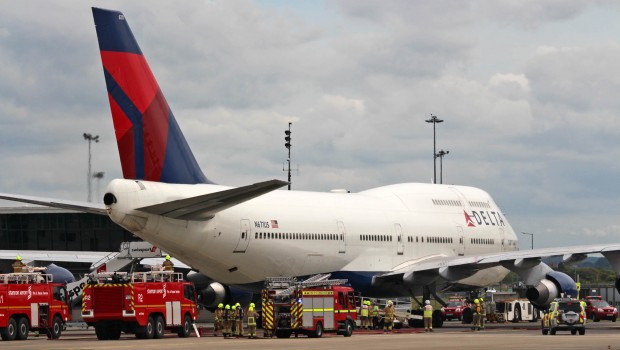 Words and Photo by Malcolm Nason

While flying over the Irish midlands operating DAL73 from Amsterdam to Atlanta on 3rd July the crew of B747-451 N671US declared an emergency due to a smoke alarm in the rear cargo hold and decided to dump fuel and divert to Shannon. The tricky crosswind conditions at Shannon dictated a landing on RW06 rather than a straight in on RW24 but gave the crew at opportunity to dump more fuel and bring the landing weight down. The pilot reported 392 POB and 150,000 lbs of fuel would remain on landing. The aircraft touched down with the fire tenders standing by. The Jumbo was stopped and the engines shut down on the runway for a visual inspection which was carried out by the fire crew who also used heat sensing equipment to check the cargo hold. The flight crew also expressed concern about the brake temperature especially on the mid fuselage bogey. The fire crew monitored the undercarriage with hoses rolled out in case they were needed. A tow truck was dispatched from the terminal to bring the aircraft to the stand where the passengers were disembarked. The rear cargo hold was then opened by fire crew members wearing BA equipment while others stood by with hoses ready just in case any fire that may have been suppressed by the halon gas would reignite, however on investigation no sign of fire, smoke or heat was found. The passengers were put up in Limerick hotels overnight prior to resuming their journey to Atlanta the following afternoon.

The Boeing 747 N671US was operating its first international service on 3rd July following return to use having been withdrawn from service and flown to Pinal Airpark on 30th September 2014. It was decided to return the aircraft to service following severe hail damage to sister ship N664US on 16th June when inbound to Seoul from Detroit and may be declared a write off. N671US left Pinal Air Park on 28th June and flew a few domestic flights before operating DAL48 from Kennedy to Amsterdam on 2nd-3rd July.

Transcript of Conversation Between ATC and Ryanair Flight Diverted to Minsk →