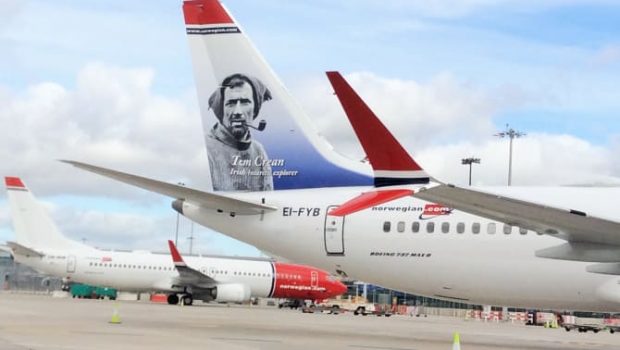 Creditors for Norwegian were back in the High Court this week to challenge the move by the airline to return over 30 aircraft to leasing companies. This is seen a key part of the survival of the airline. Five companies that are currently under examinership of the Irish Courts have asked the court to repudiate the aircraft allowing them to hand them back to the lessors.

Lawyers for several lessors complained that they had not had enough time to deal with concerns raised by the companies’ applications to the court, including potential complications arising from the fact that some agreements were governed by English law. Norwegian is in the process of disposing of over half its fleet of Boeing 737-800’s and MAX’s in a downsizing programme. They have already announced that they will discontinue long haul flights with their Boeing 787 Dreamliner’s and are returning these to lessors. Six of these Dreamliner’s are currently parked in Shannon, there is two Boeing 737MAX’s stored in Dublin since March 2019 and six of their Boeing 737-800’s have been returned to lessors at Dublin and have been prepared for lease to Transavia France.

On the operations front, Norwegian flew less than 75,000 passengers during January mostly on internal Norwegian routes, a decrease of 96% on last year and a load factor of just 35.9%. Commenting on the poor figures, CEO of Norwegian Jacob Schram said “The pandemic continues to have a negative impact on our business as travel restrictions remain. We are doing everything in our power to come out of the examinership as a stronger, more competitive airline and we look forward to welcoming more customers on board as travel restrictions are lifted.”

In the United Kingdom, Norwegian Air UK staff have been left are ‘angry and frustrated at the appalling way they have been treated by the airline’s leadership according to a Union Officer. Concerns have been raised over £10.5 million that was promised to Norwegian Air’s UK operations but was never received. According to the union, that money could permit paying the staff the owed wages. According to Aerotime.aero, instead of paying wages, the airline reportedly offered its employees to keep their uniforms and cabin bags as souvenirs!