Goshawk Delivers A320 to Heston Airlines

the Dublin-based global aircraft lessor, Goshawk has announced the delivery of one Airbus A320 aircraft to Heston Airlines. The A320

Acumen Aviation has announced it has received the award for Best Global Company – South India, during the prestigious ‘Dare 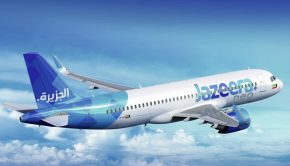 FTEJerez has announced a new partnership agreement with Jazeera Airways, the expanding airline based in Kuwait. The Spanish-based ATO expects to receive the first