Norwegian Air Shuttle is in the process of cancelling orders for 88 Airbus aircraft as part of their restructuring. Norwegian 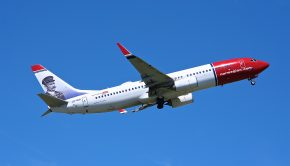