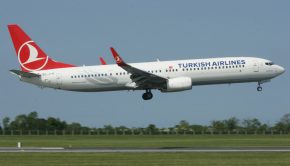 In a statement published on 31st May, the daa welcomed the fact that Turkish Airlines was celebrating ten years at