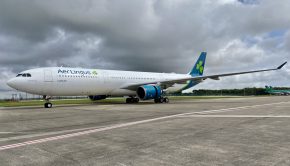 As we reported last month, Aer Lingus has applied to the ACL slot coordinator for more slots to fly new