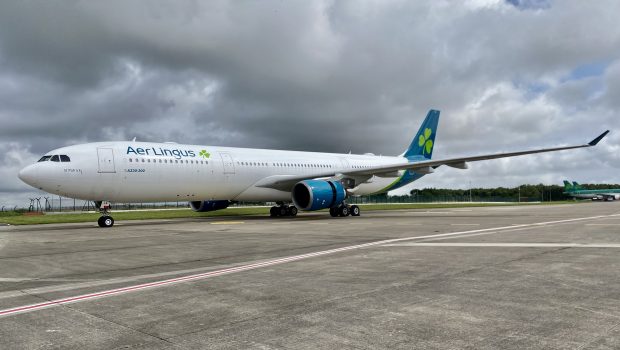 The new Aer Lingus subsidiary to be based at Manchester took to the air for the first time on Monday evening with a test flight lasting around 1h 40m. The aircraft, an Airbus A330-300 operated by Aer Lingus UK registered G-EILA (c/n 1106) and formerly EI-ELA, took off from Dublin around 18.45 and heading north towards Scotland. The flight took the aircraft up to Glasgow and then made a 180-degree turn and heading back towards Dublin. The aircraft made an approach to Runway 28L but reported poor visibility at the time, the aircraft then made a missed approach and repositioned for a landing on Runway 10R. This was the first flight of the aircraft carrying the UK markings, having officially taken up the new registration on 5th July. Its last revenue service for Aer Lingus was on the EI-104 New York JFK – Dublin service on the night of 22nd February. Aer Lingus UK will use the callsign ‘Greenflight’ and their three-letter code will be ‘EUK’.

The first Airbus A312NX to join the Aer Lingus UK fleet is EI-LRH (c/n 10319) which is due to become G-EILH in the coming weeks ahead of the start of operations from Manchester at the end of September. Having previously announced the start of the Manchester transatlantic base would begin in July, this was pushed back due to the continuing COVID restrictions on non-US citizens being allowed to enter the United States. The first two new routes will operate from Manchester to New York JFK and Orlando from 29th September with the Manchester – Barbados route starting in October.

Aer Lingus has recently returned to the Dublin – London Gatwick with eleven services per week. They are also due to return to both Hamburg and Dusseldorf in the coming days with three and four weekly services respectively.