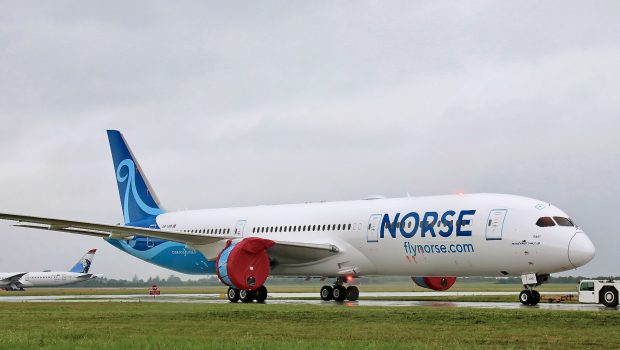 The first aircraft for the new Norwegian airline, Norse Atlantic Airways, was rolled out of the paint hangar in Shannon on Saturday afternoon. The aircraft, a Boeing 787-9 Dreamliner LN-LNO (c/n 38779) was previously operated by Norwegian and has been stored in Shannon since 11th November 2020 when it arrived from storage in Copenhagen. The aircraft has not flown any revenue flights since 18th March 2020 when the pandemic put a halt to international travel. The aircraft was built in 2017 and had operated for Norwegian since then. The aircraft is owned by leasing company Aer Cap which has agreed to lease nine Boeing Dreamliners to Norse Atlantic Airways. The new airline has since signed an agreement to take a further six Dreamliners on lease from BOC Aviation.

Norse Atlantic had previously said that it expected to take delivery of the first aircraft in late 2021 and start operations in December 2021. However, the start date is not yet confirmed but is now expected to be in early 2022. The airline expects to have all 15 Dreamliners delivered and in service for summer 2022.

Commenting on the start-up of the new airline, Norse Atlantic Airways CEO, Bjørn Tore Larsen said, “We strongly believe that there is a need for a new and innovative airline serving the low-cost intercontinental market with modern, more environmentally friendly and fuel-efficient aircraft as the world gradually reopens. Our plans are on track and operations will commence when travel restrictions are lifted and demand for transatlantic travel is back. Based on the current situation, we anticipate that all our 15 Dreamliners will be flying customers between Europe and the U.S. next summer. We will launch our ticket sales approximately three months prior to the first flight and will offer exciting destinations that have proven to be attractive,”

The airline has stated that all employees will be permanently employed by the airline. The company has emphasised a fruitful employer-employee relationship and has entered into an agreement with the largest U.S. flight attendants’ union, AFA. In addition, the company is in dialogue with unions in other countries. Norse Atlantic has grown from the ashes of the former Norwegian long-haul division who had numerous problems with employee Unions due to the poor staff contracts. Norse has applied for a Norwegian AOC and is in the process of applying for a British AOC. They expect to have around 1,600 employees by summer 2022. The airline has yet to announce its routes but it is expected they will fly from bases in Copenhagen, Oslo and London Gatwick to transatlantic destinations such as New York, Chicago and Los Angeles initially.