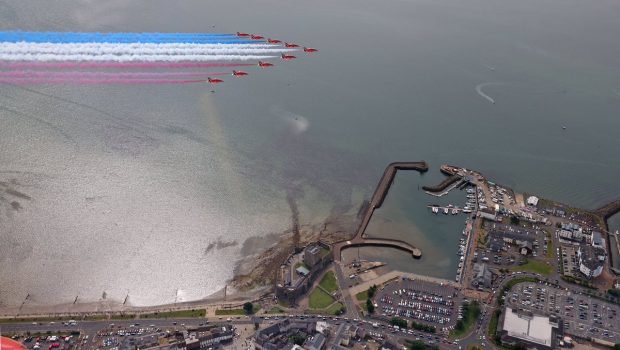 The RAF Red Arrows display team performed a flypast of Carrickfergus in Northern Ireland as part of Armed Forces Day. The flypast took place at 11.00 am with the Hawks trailing smoke in red white and blue. The display team had departed from Prestwick in Scotland at 10.40 am for the twenty-minute transition across the Irish Sea. The aircraft proceeded on for a landing at Belfast International Airport for refuelling before departing again at 2.10 pm and heading back out over the sea at Carrickfergus again and returning to the teams home base of RAF Scampton.

The RAF Red Arrows are known for representing the public face of the UK armed forces. Flying the British Aerospace Hawk fast-jets, the team is made up of pilots, engineers and support staff that have all experienced front line missions. The Red Arrows have been displaying at airshows in the UK and around the world since 1965. The team has flown almost 5,000 displays.