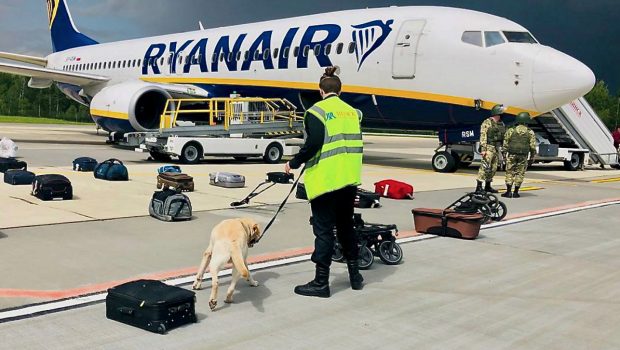 Following yesterday’s incident with the Ryanair flight from Athens to Vilnius was forcibly diverted to Belarus, the EU has strongly condemned the incident by the Belarus authorities. Following initial reports of a bomb threat, the aircraft was escorted to Minsk by a MiG-29 of the Belarus Air Force. No devices were found and all passengers were searched. However, one passenger Raman Pratasevich was detained, along with his girlfriend and when the flight continued on to Vilnius after around seven hours in Minsk a further four passengers did not travel. These are believed to be members of the Russian KGB who had monitored Raman Pratasevich’s movements in Athens. He is the former editor-in-chief of one of the popular Telegram news channels in Belarus, Nexta Live and had fled the country by the time the authorities put him on their terrorist list last November.

The EU Commission President Ursula Von Der Leyen has demanded the immediate release of a journalist who was removed from a diverted Ryanair flight to face charges in his native Belarus. In a statement this evening, Von Der Leyen said, “The EU Council is discussing sanctions to impose on Belarus. We will keep pressure on the regime until it respects the freedom of opinion and of the media. Roman Pratasevich must be released immediately.”

Ryanair’s Michael O’Leary called it a case of “State-Sponsored Hi-Jacking” and praised the crew who did a “phenomenal job to get that aircraft and almost all the passengers out of Minsk after six hours.”

Also commenting was the IATA Director General, Willie Walsh who said, “IATA strongly condemns any interference or requirement for landing of civil aviation operations that is inconsistent with the rules of international law. The details of the event with flight FR 4978 are not clear. A full investigation by competent international authorities is needed.”

Ryanair have said that if sanctions were brought in regarding the transit of Belarus airspace, it would only have a minor effect as not many flights would transit that area.