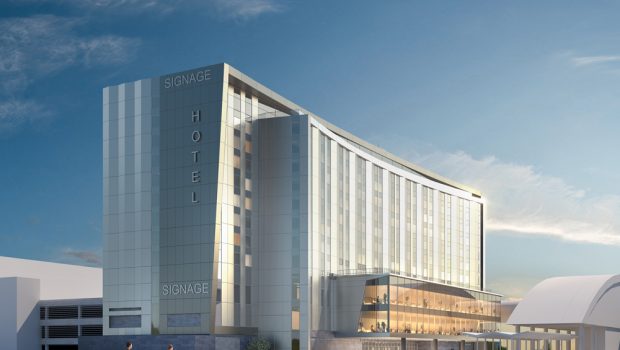 A new hotel is to be built at Dublin Airport which will have a direct link to Terminal 2. The daa has signed an agreement with the UK hotel group Arora who has lodged a planning application for a new 410-bedroom luxury hotel. The hotel will be the first Irish hotel in the Arora Group who already operate 12 hotels including ten located at airports in Heathrow, Gatwick and Stansted. It is expected to have at least a four-star rating.

Subject to planning, Arora intends to begin construction of the new hotel later this year or in the first quarter of next year. The project is expected to have a 24-30 month construction phase, meaning the hotel is likely to open in 2024. Up to 300 construction jobs will be created during the works and the hotel will employ approximately 250 staff when it opens. The eleven storey hotel will have a total floor area of 30,566 square metres and will feature meeting rooms, a leisure centre with a gym, steam room, sauna and jacuzzi on the third floor, and a penthouse bar and executive lounge area on the top floor.

The deal between the daa and Arora is for the design and build, finance and operation of the new hotel on a site just in front of the existing Terminal 2 car park. Under the agreement with daa, the hotel will be operated by Arora for 100 years and ownership will then revert to daa and will be operated by a global brand that has yet to be announced.

Commenting on the new hotel proposal, daa Chief Executive Dalton Philips said, “This investment by Arora is a significant vote of confidence in the long-term prospects of the Irish economy and of Dublin Airport. This development will bring very significant benefits for our customers and to the wider economy, both locally and nationally. There is strong demand for terminal-linked hotels, and they are a feature of most large airports.”