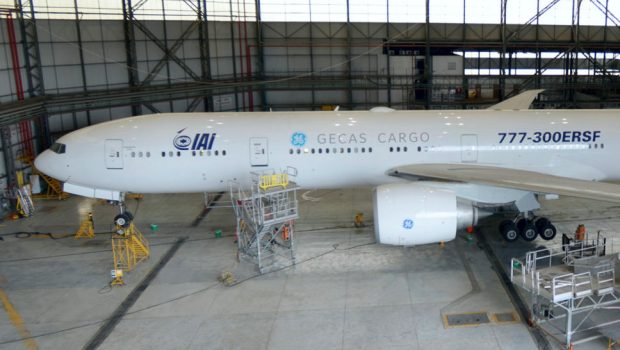 GE Capital Aviation Services (GECAS) and Israel Aerospace Industries (IAI) have now passed the planned halfway phase of the Supplemental Type Certificate (STC) Development Program for the 777-300ERSF. This a key milestone for “the Big Twin,” the GECAS-IAI Co investment for the passenger-to-freighter conversion program of the GE-90 powered 777-300ER, as it now moves beyond planning into the phase of physically modifying the aircraft. After extensive planning and preparation, the STC Development Program has already completed the Critical Design Review (CDR) and subsequent Design Freeze of the 777-300ERSF. The prototype 777-300ER aircraft, N557CC (c/n 32789) was delivered to IAI’s facility in Tel Aviv by GECAS in June of last year. Since delivery, ground and flight tests have been completed as the prototype aircraft travelled between Tel Aviv and the United States. The aircraft has now returned to Tel Aviv to enter its pre-conversion preparation phase.

Commenting on the project, Rich Greener, SVP and Manager of GECAS Cargo said, “We’ve begun executing on the dedicated freighter design developed by the IAI and GECAS Cargo team towards manufacturing the kits, and the actual conversion phase under a licensing from Boeing. By leveraging our fleet of passenger aircraft to provide freighter conversion feedstock, we’re delivering on our strategy to meet the need for replacement of retiring freighters and increased demand for dedicated cargo capacity. We see the Big Twin meeting requirements of the air cargo industry for the next 20 years, so entering this next phase is thrilling.”

A new passenger to freighter conversion program requires significant planning and preparation before modifications such as the addition of the Main Deck Cargo Door, freighter lining, window plugs, a modified crew compartment, a reinforced fuselage, an all-new floor structure to support the 222,000 Lbs. MSP, a 9G rigid cargo barrier, and a powered cargo loading system. The first order was announced in October 2020 for Kalitta Air, and the first delivery is expected in 2023. The airline has a fleet of over 35 aircraft comprised of Boeing 747-400’s, Boeing 767-300’s and Boeing 777-200 freighters.