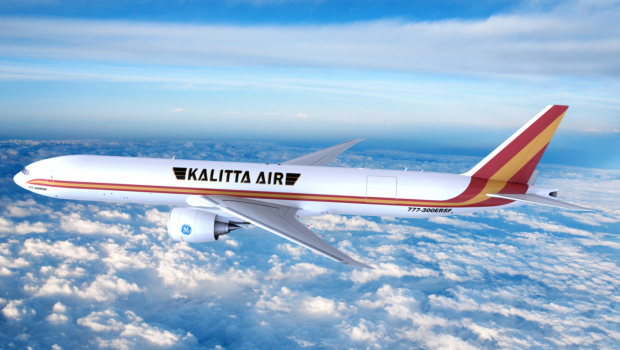 Shannon based GECAS announced an agreement with Kalitta Air for three 777-300ERSF aircraft. Kalitta Air will be the first operator of the new passenger-to-freighter type, adding to their already large all-cargo fleet when the first of these aircraft is delivered in 2023. The Boeing 777-300ERSF will be the largest ever twin-engine freighter. The conversion program is jointly funded by GECAS and Israel Aerospace Industries (IAI).

Kalitta Air has over 20 years experience of cargo operations both schedules and charter flights. The airline has a fleet of over 35 aircraft comprised of Boeing 747-400’s, Boeing 767-300’s and Boeing 777-200 freighters.

The Boeing 777-300ERSF has become known as ‘The Big Twin’ and it will offer 25% more capacity and it is anticipated that The Big Twin will achieve up to 21% lower fuel-burn per tonne than the current 4-engine freighters with the GE90 engines. This was designed specifically for the longer-range Boeing 777 series, providing up to 115,000 lbs. of thrust. In addition to producing the sole-source engine for the 777 variants, GE Aviation will support MRO engine and power-by-the-hour services to ensure continued performance throughout the lifecycle of the converted freighters.

Speaking as the deal was announced, Rich Greener, SVP and Manager Cargo of GECAS said “We are delighted to continue our 15-year relationship with Kalitta Air and proud they’ve become the launch customer with the 777-300ERSF freighter for its future air cargo operations. The 777-300ERSF shares extensive commonality with the production 777-200LRF. That’s a benefit to any operator looking to bring a new type into their fleet. GECAS Cargo has developed a new standard for aviation lessors, leveraging our fleet of passenger aircraft to provide freighter conversion feedstock — for this 777-300ERSF program as well as converting 737-800NG’s, This approach extends the useful life of our aircraft and GE / CFM engines while meeting the need for replacements of retiring freighters and increased demand for dedicated cargo capacity.”

The first aircraft to be converted from passenger to cargo for Kalitta isa former Emirates Boeing 777-300 A6-EBB which was built in 2005. The aircraft was registered to GECAS last January and it was ferried to Tel Aviv in early June to begin the cargo conversion process.