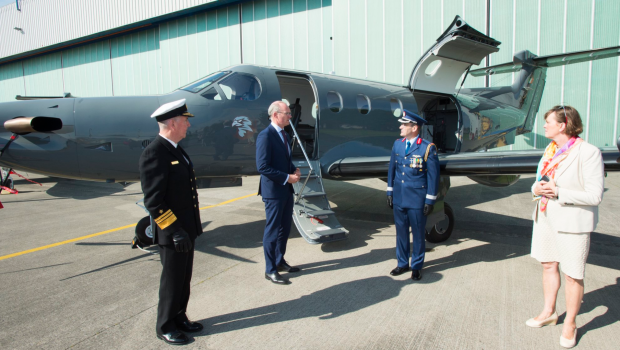 Minister for Defence and Foreign Affairs Simon Coveney was in Baldonnel today to officially welcome the arrival of the three new Pilatus PC-12NG Spectre aircraft for the Air Corps. The Minister was accompanied by the Department of Defence Secretary General, Jacqui McCrum and Chief of Staff, Vice Admiral Mark Mellett, and was met by General Officer Commanding the Air Corps, Brigadier General Rory O’Connor and members of the team involved in delivering the Project.

The contract for the supply of the aircraft was awarded to Pilatus in December 2017 following an open tender competition. The new aircraft, which replace the five Cessna FR172H aircraft purchased for the Air Corps in 1972 and were in constant operation with the Air Corps until their retirement last year. The PC-12NG’s are equipped for Intelligence, Surveillance, Target Acquisition and Reconnaissance (ISTAR) operations, logistics support including transport of Defence Forces troops and equipment, and medical evacuation/air ambulance taskings.

Speaking at the event in Baldonnel, Minister Coveney said “The arrival of these aircraft is a great boost to the Air Corps and I am personally delighted to see it come to fruition. These aircraft will provide a versatile capability to the Air Corps and will be capable of operating in various roles on a 24/7 basis in all types of weather conditions. The investment of over €43m in these aircraft is an indication of the Government’s ongoing commitment to ensuring that all branches of the Defence Forces are appropriately equipped to deliver a range of flexible military capabilities to meet the roles assigned by Government. “

The three PC-12’s arrived in Baldonnel from the Pilatus facility in Colorado on Thursday 10th September. The aircraft have undergone a series of tests and inspections. Further flight and equipment testing will take place over the coming weeks before the aircraft are fully accepted and ready for operations.