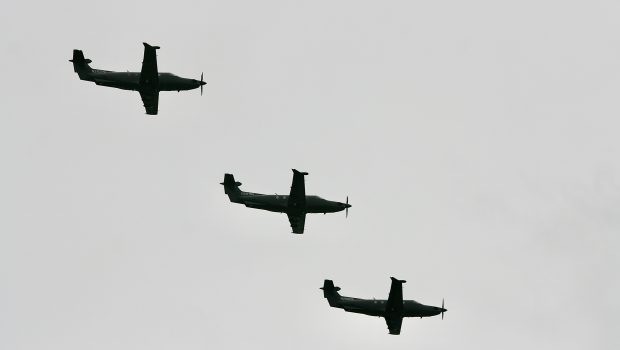 The Irish Air Corps have taken delivery of three Pilatus PC-12NG ‘Spectre’ aircraft. The three aircraft arrived in Baldonnel shortly after midday following a three day trip from the Pilatus facility near Denver, Colorado where the aircraft had been since early 2019 getting their mission equipment fitted. The three aircraft all flew the same route following each other minutes apart. On arrival at Baldonnel the aircraft had formed together to perform a flypast and then flew across the south city as far a Killiney, returned to Baldonnel for a flypast and break for landing on RWY29.

The routing from Rocky Mountain Metropolitan Airport near Denver took them to Burlington Airport in Vermont with a flight time of just under five hours. After an overnight stop, the three aircraft took relatively short two and a half hour hop up to Goose Bay on the Canadian east coast prior to the Atlantic crossing. On Wednesday, the three aircraft had an early morning departure for the first part of the Atlantic crossing to Reykjavik in Iceland. This leg of the journey took around 4 hrs 45mins. Initial speculation from social media was that the aircraft would arrive into Baldonnel in the afternoon, but Thursday morning saw the three aircraft pinging on the online flight trackers that they were departing from Iceland in the early morning. The four hour flight to their new home base saw them depart easterly from Reykjavik towards Scotland, before turning south abeam the Scottish Isles and crossing the Irish coast just west of Malin Head. They continued south, before turning east at Mullingar and then the three aircraft joined up in formation near Clane for the flypast of Baldonnel, landing a few minutes later.

After the arrival, the aircraft were back in the air soon after with some familiarisation flights for Air Corps crew. The aircraft will now have flight and equipment evaluation taking place over the coming days and all three aircraft are then accepted onto the Irish Military Register. The only identification marks that aircraft are currently carrying is the US civilian registrations N280NG (c/n 1795), N281NG (c/n 1838) and N282NG (c/n 1844) and they will take up serials 281, 282 and 283 in due course. No Irish Air Corps roundels or markings are on the aircraft yet but these will be added prior to them entering active service.