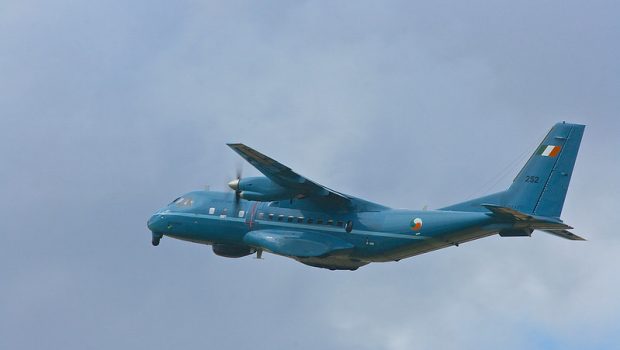 The Irish Air Corps operated a humanitarian flight to the Lebanon on Wednesday 12th August. The flight carried 1.5 tonnes of medical aid and PPE (Personal Protective Equipment) and delivered it to the people of Beirut which suffered a missive explosion when 2,750 tonnes of ammonium nitrate that had been stored unsafely at a warehouse in the port on 4th August. The explosion caused at least 220 deaths with over 6,000 suffering injuries and widespread damage to buildings up to 10km away. Over 300,000 people were left homeless due to the explosion. An international response was launched in the days following the blast and numerous nations have sent aid and assistance is being coordinated by the United Nations and the WHO (World Health Organisation).

The flight by the Irish Air Corps was operated by CASA CN-235 ‘252’ which also completed 20,000 flight hours en-route to Lebanon. The CASA was delivered to the Irish Air Corps along with ‘253’ in December 1993. These two aircraft have been extremely valuable to the Air Corps as they have provided excellent service on numerous occasions. Their roles are primarily Maritime Patrol of the Irish Economic Zone, an area of approximately 132,000 square miles or 16% of the total EU sea fisheries. They have also been called upon to operate Air Ambulance missions, Military transport, Search and Rescue top cover operations and Parachuting. These are scheduled to be replaced by two larger CASA 295 aircraft which are on order and due for delivery in 2023.

Earlier this year, then Taoiseach and Minister for Defence Leo Varadkar was reported to have requested the Department of Defence to examine the possibility of acquiring a transport aircraft for the Irish Air Corps as Ireland is one of only a few EU countries that doesn’t have its own dedicated transport aircraft. Given that the recently acquired Pilatus PC-12 has already proven to be a valuable asset to the Air Corps, it would be interesting to see if the idea has received any further consideration from the new Government. The PC-12 was on hand to urgently bring COVID-19 tests to Germany for examination, and assist with the repatriation of troops and supplies on UN missions in Kosovo and Africa. The acquisition of the Pilatus PC-12 was made at short notice and it has since been reported that Pilatus initially offered two aircraft, but officials from the Department of Defence decided to only acquire the one. The missions undertaken by the PC-12 have only underlined further the need for a dedicated tactical transport aircraft. It may be worth considering the retention of the CASA CN-235’s following the delivery for the two C-295MPs. Given their age and airframe hours, it is unlikely the CN-235s would have any realistic resale value. Reconfigured to the transport role the CN-235’s may offer a cost effective, if possibly short term, solution to this operational gap in the Defence Forces capabilities.