Ryanair have launched their Irish Winter 2018 schedule, with 9 new routes and additional flights on 11 other routes. This will deliver up to 15.6m customers per year and support up to 11,700 jobs at the 5 Irish Airports that Ryanair operate from. This represents a growth of by 5% in Ireland over 2017. Ryanair now operate 76 routes out of Dublin and many seasonal routes have been stretched to year-round. 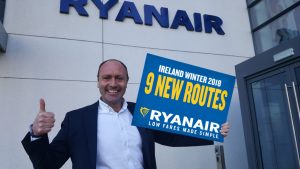 Ryanair’s Kenny Jacobs said “We are pleased to launch our biggest ever Irish Winter 2018 schedule, which includes 9 new routes and more flights on 11 other routes, which will deliver 15.6 million customers p.a. and support 11,700 jobs at Dublin, Shannon, Cork, Knock and Kerry airports, as Ryanair grows by 5% in Ireland.”