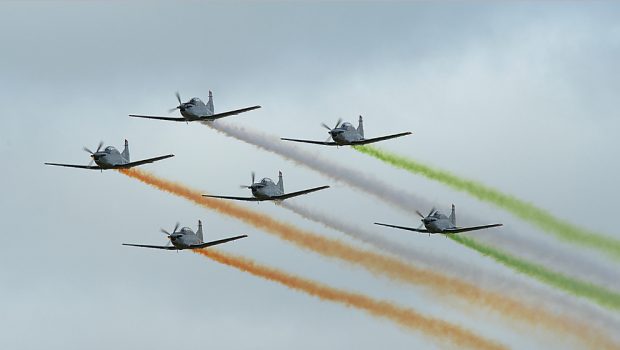 The Air Corps Aerobatic Display team will complete a fly past down the River Liffey at 11:00 this morning to officially mark the beginning of the “Aviation Ireland” weekend. If you get any photos of the fly past, please send them to us and we’ll post on this page (mark@flyinginireland.com or send via our FB page)

The ‘Aviation Ireland’ weekend intends to raise the profile of aviation industry in Ireland, with incredible aerobatics taking place in the two spectacular coastal locations of Foynes and Bray. Commenting on the ‘Aviation Ireland’ weekend, Eamonn Brennan, Chief Executive of the Irish Aviation Authority said “The Bray Display has been a phenomenal success over the last couple of years. Aviation is a hugely important economic driver for our country and this year under the IAA’s ‘Aviation Ireland’ campaign we are supporting not just one but two spectacular air shows over the same weekend at Foynes and at Bray, making this year an extra special one for fans of aviation across Ireland. We see this as a great avenue to generate an interest in our industry.”

Some of the aircraft and acts on display in the east and west coast locations include; the Springbok Classic Air, the DC-3, the Irish Historic Flight Foundation, the Spanish Air Force – F-18 Jet, the Norwegian MiG-15, Gerry Humphreys – Ireland’s beloved “flying farmer”, the Norwegian Vampire Jets, the Royal Jordanian Falcons, the Blades – a display team of former Red Arrow pilots, and the Swedish Air Historic Flight team.

Here’s a video of the Air Corps PC-9 display practice for Bray last year. It’s a 360° video so you can use your cursor to drag the camera and change the view.