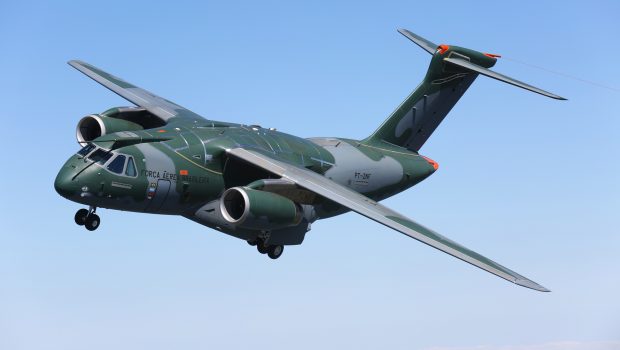 The Embraer KC-390 taking on the heavy weights

It takes a brave aircraft manufacturer to challenge the status quo and enter areas of the industry which it has little or no experience. Embraer of Brazil, with its highly successful RJ/Legacy and E series aircraft, is one manufacturer which not only attempts but seems to relish the challenge.

Farnborough 2016 saw the first international appearance of their latest and possibly boldest developments – the KC-390. The Embraer KC-390 is a medium-size, twin-engine jet-powered military transport aircraft intended to compete directly with the Lockheed Martin C-130J in the military tactical airlifter market.

Lockheed’s workhorse has dominated the medium tactical airlift market for over 60 years, but it’s an old design. Despite its modern fuel efficient engines and glass cockpit the latest offering the J model, is 20 years old. Embraer isn’t the first to challenge Lockheed Martin in their own backyard. Airbus Industries market their impressive but a present problem child the A400M as the ideal replacement. But at a unit cost of over US$150m it’s only really affordable to tier 1 countries like France, Germany and the UK, and at 37 metric tons can hardly be classed as a direct replacement for Hercules. While Lockheed Martin’s C-27J and Airbus’ C-295M appear to be slugging it out for the lower end of the medium lifter market. The C-295M appears to winning on points at the present, So for those legacy Hercules operators the only replacement is a C-130J or is it? Embraer think otherwise. In today’s ever shrinking defence budgets few countries can afford the capital and life cycle costs of a C-130J. The Embraer’s marketing buzz words on project are Capable, Flexible, Affordable. With the KC-390, Embraer believe they have an aircraft to establish new capacity and performance standards in its category, delivering at the same time the lowest life-cycle cost in the market. The KC-390 offers fierce competition for its American rival. Compared to the C-130J, the KC-390 is expected to be 15% faster, carry an 18% heavier payload, and cost 59% as much. And although having a 15% shorter range than the C-130J, the KC-390 has an aerial refuelling capability as a standard feature.

Development began in 2006 in response to a Brazilian request for a replacement of its legacy Lockheed C-130H fleet. The first prototype (PT-ZNF) was rolled out at Sao Paulo on 21 October 2014, and flew for the first time on 3 February 2015. Due to the economic downturn in Brazil the program was scaled back with the second flight not taking place until the 26 October 2015. The second prototype (PT-ZNJ) joined the test program in April 2016.

Like the many designs the KC-390 is an international affair. Major subcontracted assemblies include the rear fuselage section by Aero Vodochody in the Czech Republic. The tail cone, cargo door and landing gear doors are to be manufactured in Argentina. Chile’s ENAER are heavily involved in the program and significant engineering works will be undertaken by Embraer’s subsidiary in Portugal. Finally, possibly learning from Airbus’ problems with the Europrop TP400, the KC-390 is powered by a pair of IAE V2500-E5 turbofan engines, a proven design on the Airbus A320 family but its first military application. 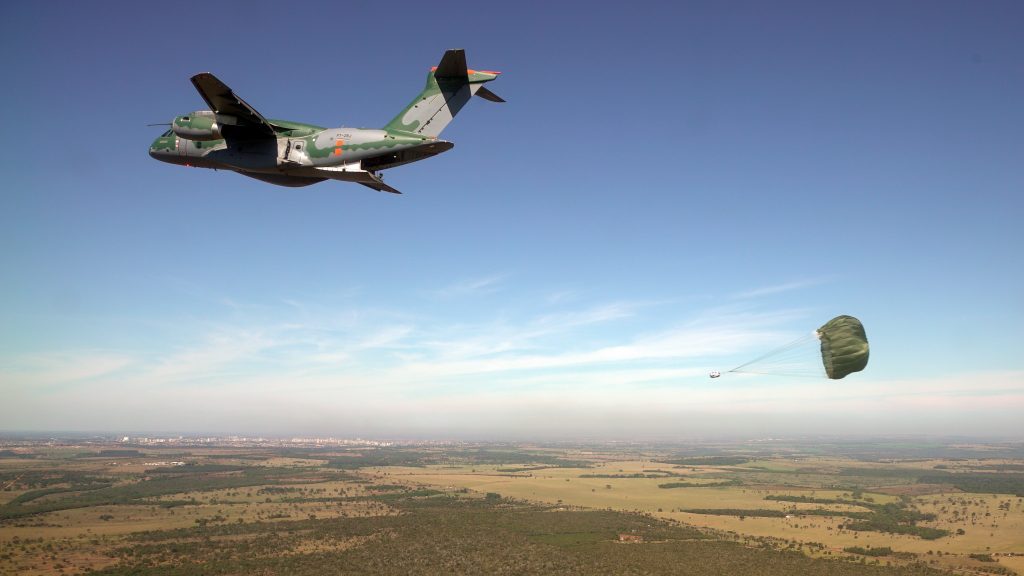 The KC-390 has a spacious, rectangular cargo bay that spans much of the fuselage’s length, and a rear ramp allowing for a RO/RO (Roll-On, Roll-Off) capability. At 3.45m wide and 2.95m high the 12.7m long cargo hold – 18.5m if the rear ramp is used – can accommodate cargo weighing up to 23 metric tons (for example, three Humvee’s, a MOWAG Piranha III or one Blackhawk). As noted the aircraft is designed with air refuelling capabilities as standard and will be certified for both military and civilian use from the outset.

Flight controls are fly by wire with Rockwell Collins supplying the avionics including HUD displays for both the pilot and co-pilot, a night vision system, a GPS system, and a CARP (“Computed Air Release Point”) system that allows for the automatic opening of the cargo doors and release of cargo at a specific point in mid-air. Both the pilots have identical controls and instruments at their stations. Interesting the Brazilian Air Force has requested the installation of a navigator’s station behind the co-pilot. Despite this additional workstation the spacious cockpit also has room for three crew seats at the rear bulkhead. Below the cockpit on the main cargo deck is an airline style lavatory – a welcome addition for those that have had to endure the facilities on a Hercules.

As a genuine multi-mission aircraft, it can transport and launch cargo and troops and perform a wide array of missions such as medical evacuation, search and rescue and aerial fire fighting, among others. Illustrating the manufacturer’s reduced operational costs mantra the cargo area can be reconfigured from carrying seven 463L pallets to 66 paratroopers by one crew member in a matter of minutes using the innovate push and click system of the cargo handling system. 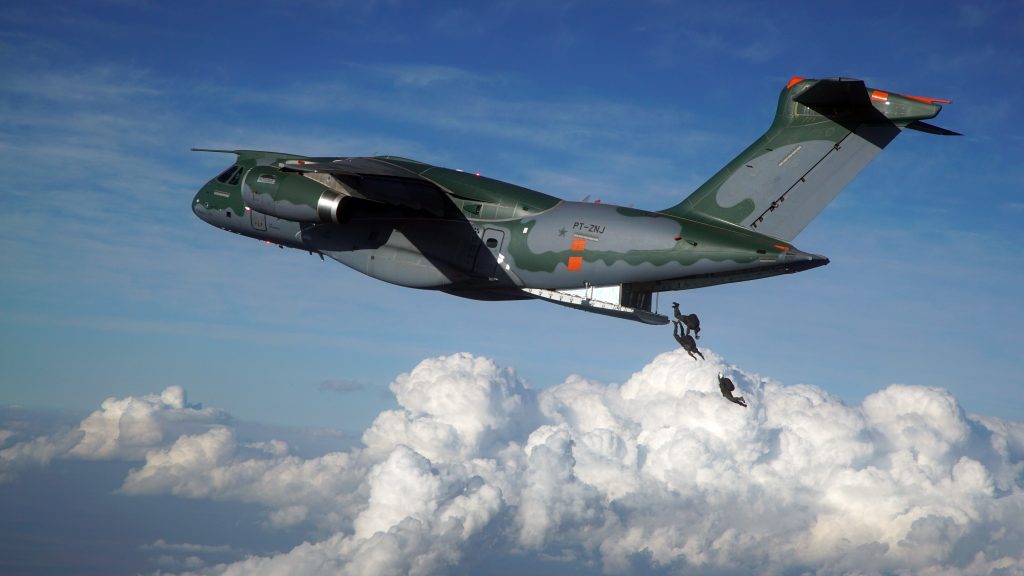 Paratroops testing the rear ramp of the KC-390

KC-390 is progressing extremely well, matching the aircraft performance and capability goals predicted through the use of the latest engineering tools.

Since the restart of the flight test campaign, on 26 October 2015, the KC-390 prototype has presented a very high availability, logging an unprecedented flight rate in the program, with more than 300 flight hours accumulated. The current stage of the flight test campaign was dedicated to a general assessment of its systems, performance and flying qualities. Embraer has recently performed the initial cargo airdrop and paratroops assessment as well as the rear ramp, cargo door and paratroops door operation. The program has already covered the full flight envelope of the aircraft reaching cruise speed of Mach .80 and operational ceiling of 36.000 feet, performing daily flights. Other milestones achieved also include flight control systems, side sticks linked and active, complete flap and slat configuration tests, as well as in-flight shutdown and restart of the engines and APU.

The flight test schedule for 2016 includes aerodynamics freezing, air drop tests, paratrooper evaluation and aerial refuelling hose stability. In total, the flight test campaign is expected to last around two years. Embraer expects to receive the certification of the KC-390 by the end of 2017 with first deliveries of the aircraft scheduled for the first half of 2018.

An aircraft’s success is determined by orders. To date Brazil has ordered 28 examples and will also eventually take the two prototypes in charge. In June 2016 Portugal confirmed the acquisition of six and orders are close to being finalised with Argentina and the Czech Republic. But these countries are all heavily involved in the program.

Embraer’s target market is the legacy C-130 operators. Cleverly Embraer identified it’s weakness in this market and realised if it were to challenge the Lockheed Martin monster it would need support. In June 2012, Embraer agreed to a co-operation deal with Boeing in order to speed development of the aircraft; exchanging technical and market information, and possibly teaming up for commercial opportunities. This co-operation may be just what Embraer needs to push a few important doors open. A delegation from the Swedish Air Force were said to have paid keen interest in the KC-390 at FIA. Following the show the aircraft undertook a tour of Europe, the Middle East and North Africa – although Embraer representatives at the show refused to identify what countries would be visited. Many commentators have noted that the C-130J has a greater range but is that really important if your target market have no requirement for using medium tactical transports on effectively strategic airlifts? There are a lot of Air Forces operating old medium transports that will soon need a Capable, Flexible and Affordable replacement. If these three words live up to the test Embraer may just be onto a winner and it won’t be just the C-130s in their sights. 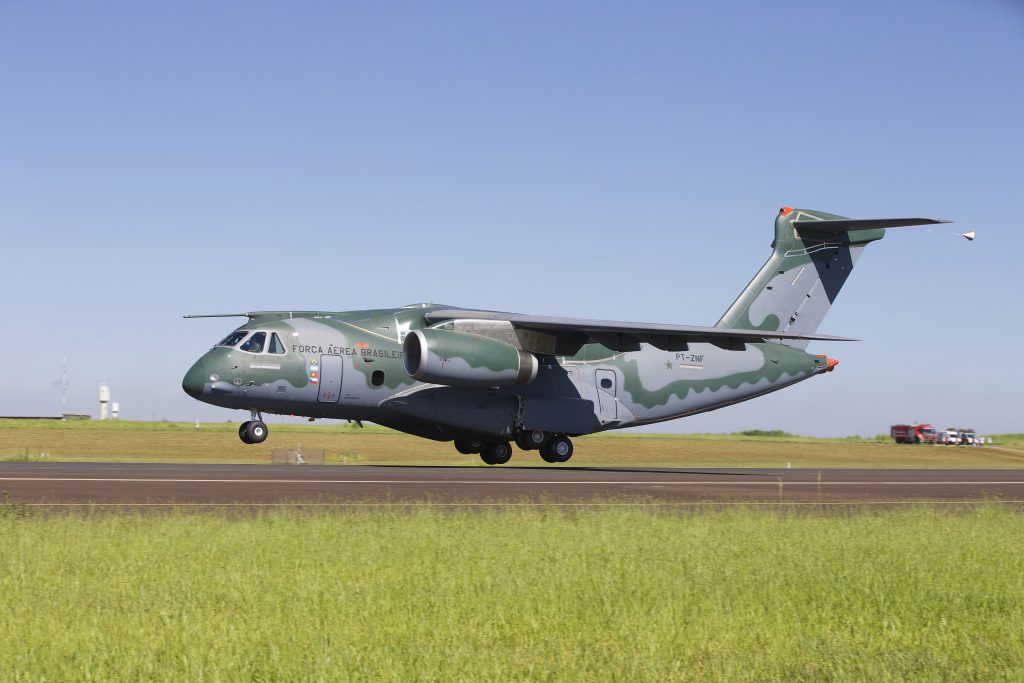 How the big two commercial aircraft manufacturers, Airbus and Boeing fared at Farnborough →