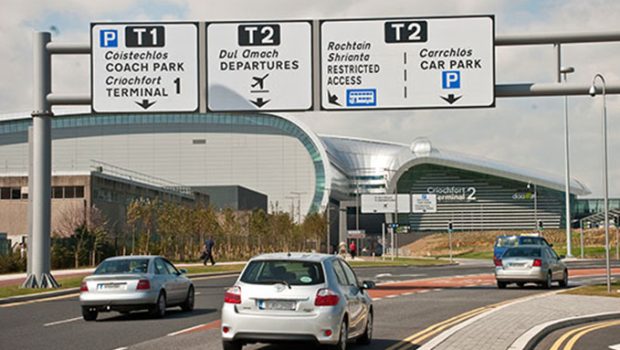 On 16th June, it was announced that the daa would hold public information and consultation events over the coming weeks to provide an opportunity for local residents and community groups to view at first-hand the plans for Dublin Airport’s new runway.

The 3,110 metre (10,203 ft) North Runway was granted planning permission in 2007, with 31 conditions attached, and will be located within existing daa lands, some 1.6 km (almost a mile) north of the current runway. See planning conditions here. 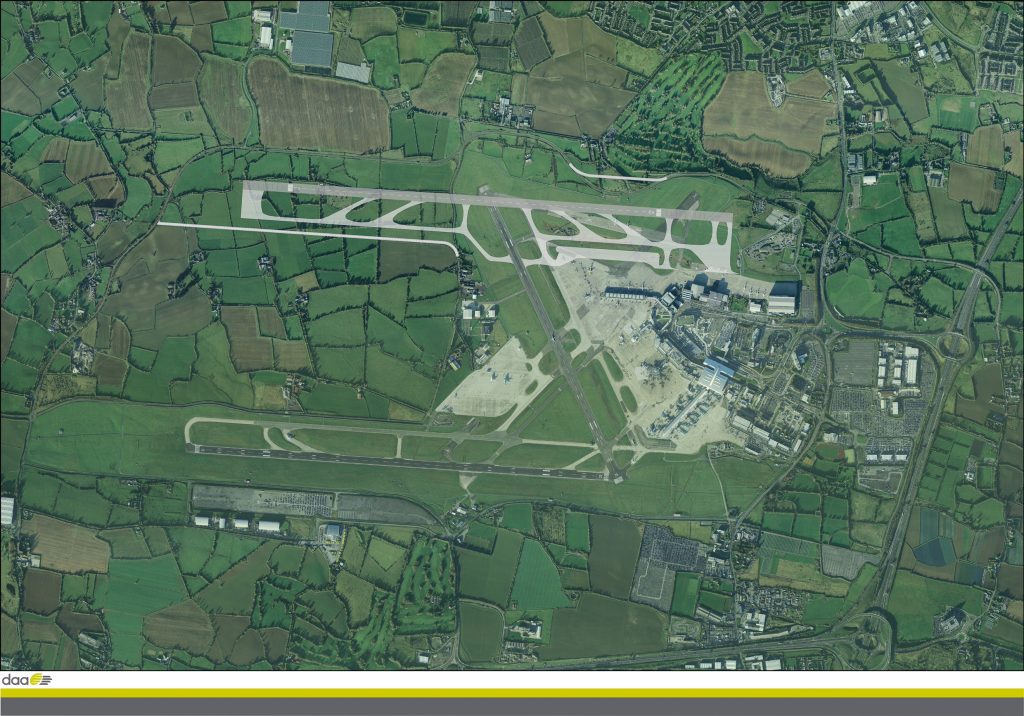 North Runway will facilitate the creation of 31,200 new jobs over the next 20 years, as well as contributing an extra €2.2 billion, to the Irish economy. The development of the runway will allow the airport to grow for the benefit of the Irish economy, by supporting additional trade, tourism and foreign direct investment in Ireland.

North Runway is also a highly significant strategic project for the Fingal area, which has been a major beneficiary of the economic activity at Dublin Airport. The airport currently supports about 97,000 jobs, one-quarter of which are held by Fingal residents.

daa has said previously, that two of the existing runway planning conditions, impact the airport’s ability to accommodate future demand at key operational times. This would mean that the airport would have less capacity with two runways during these key periods, than it currently has with one.

daa intends to enter a process to address these two onerous conditions and to retain the operating flexibility that currently exists at Dublin Airport. The restrictions on airport operations that are contained in the planning permission for the second runway appear to be for the purpose of noise management. New EU legislation in this area came into effect on 13th June – specifically EU Regulation 598/14 concerning noise-related operating restrictions at EU airports, which requires the application of a balanced approach, between stakeholders. See here.

This regulation sets out the mandatory procedure to be followed when introducing operating restrictions at airports. The new noise regulation could present an opportunity to establish a modern, cohesive and measured approach to the management of noise at Irish airports, and the Government believe that it is capable of delivering the best outcome for all stakeholders. The Department of Transport, Tourism and Sport, the Office of the Attorney General and the Department of the Environment, Community and Local Government are currently engaged in discussions, on the technical details of the appropriate implementation of this regulation.

As part of the process to address the existing conditions, the daa will be preparing an Environmental Impact Statement (EIS) and is inviting members of the public to identify matters that they would like daa to take into consideration, when developing this EIS. The EIS will be the focus of a further public engagement process, which is likely to take place in the autumn. It is, we understand, being prepared for the purpose of seeking a review of the operating restrictions foreseen for Dublin Airport, under the existing planning permission for the North Runway.

“Given the strategic importance of this project to the country and in particular to Fingal, we would like to share information about our plans with all interested parties, most especially our neighbours in the community with whom we continue to work closely,” said Dublin Airport spokeswoman Siobhan O’Donnell.

“A team from daa, together with external experts will be available to share information in relation to the North Runway and to answer any questions that attendees may have,” she added.

Details of other elements of the public consultation are available on www.northrunway.ie.

It was on 7th April of this year that the daa announced that it was progressing its plans to deliver the new North runway for Dublin Airport. Some €320 million is being invested in this multi-faceted project, which will comprise multiple contracts and packages of works, and which is expected to be delivered in 2020.

Plans for a new runway (the new North Runway) parallel to the current main runway, Runway 10/28, have featured in successive Local Area and County Development Plans, since the 1970s. As a result of years of careful planning, land for this development was safeguarded more than 40 years ago by the daa. Runway 10/28, which was opened on 21st June 1989, and lies in an east/west direction, is just over 2.6 km (8,530 ft.) long, and is the airport’s main runway, accounting for 95% of all aircraft movements. The other runway is Runway 16/34, which lies in a north/west, south/east direction. It is just over 2 km (6,562 ft) long and is mainly brought into use when the acceptable crosswind component is exceeded, or when essential maintenance is required on the main runway. 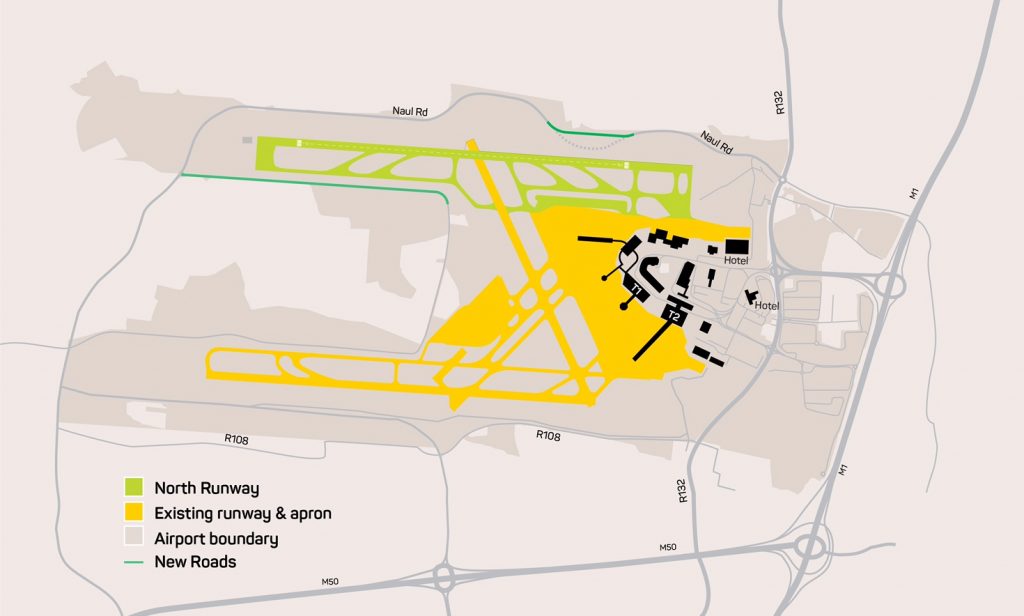 The plan for the new runway at Dublin

Dublin Airport also has 35 taxiways that assist with the movement of aircraft to and from the runways. The airport currently has 62 contact aircraft parking stands, serving four piers from two terminals, and 53 remote aircraft stands.

As noted above, Dublin Airport received planning permission for the runway in August 2007, but the plans were put on hold due to the economic downturn and subsequent fall in passenger numbers. However, the recovery in passenger numbers, particularly in the past two years, has been significant. The continuation of growth at Dublin Airport is therefore dependent on having sufficient capacity available to satisfy future demand. Enabling works for the new runway are due to commence later this year, with construction of the north runway itself, scheduled to start in 2017.

The rapid recovery in passenger numbers is due to a combination of almost 50 new routes and services, significant additional capacity increases on a number of existing routes, and nine new airlines operating at Dublin Airport. Total long-haul connectivity has grown by more than 65% since T2 opened, while short-haul connectivity has increased by 16%.

The daa are convinced that Dublin Airport’s North Runway development has the potential to open up connectivity to a range of long-haul destinations, particularly in fast growing economies in Asia, Africa and South America. The delivery of a new runway could support a further 31,000 new jobs over the next two decades, contributing €2.2 billion to GDP.

As part of the new runway project, a new 87 metre (285 ft) high control tower is planned, at an estimated cost of €50 million. The Irish Aviation Authority (IAA) has already secured planning permission for the new tower, which is 1.5 times the height of Liberty Hall, and will be located on a site between the existing and planned new parallel runways. Construction of the new structure could start by next March, after the IAA invited preliminary tenders, during May. 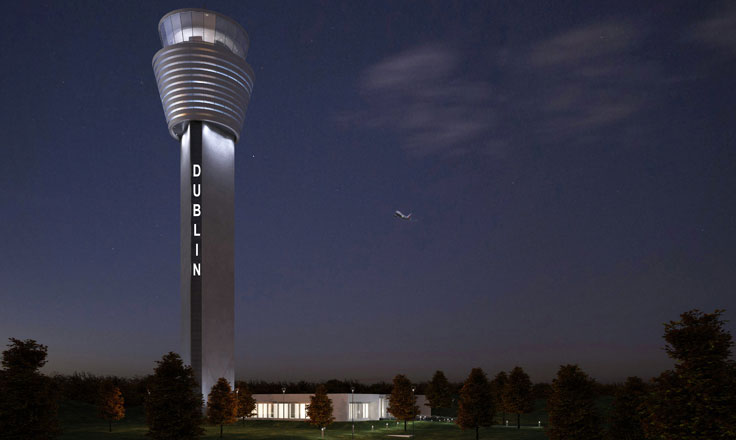 The new control tower design, developed by Consulting Engineers Arup and architects Scott Tallon Walker, features a five level cabin at the top of the 17-storey structure, as well as area control functions, which are handled within the base building. It provides unobstructed views of current and future runways, acoustic control and resilience of power and communications services. It will also feature top class maintenance access to reduce downtime, access control for security reasons and quick evacuation in case of emergency. See here

The new tower is expected to take 18 months to construct and the IAA has told prospective bidders that it expects to award a contract later this year.

One of the largest airfield projects in the airport’s current programme is a €20 million development to boost airfield capacity, with the addition of 10 new aircraft parking stands and three aircraft taxiing lanes. The new stands, which are located at the northern end of the airfield, are the largest single capital investment at the airport since the opening of Terminal 2 in 2010. This project is required urgently due to the significant passenger growth that has been experienced at the airport over the last two years. 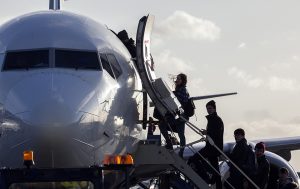 Passengers boarding an aircraft at Dublin

The new apron area, known as Apron 5G, covers 67,500m² (726,564 ft²), which is equivalent to 15 football pitches. This project also includes the replacement and upgrading of drainage infrastructure, and the provision of underground surface water attenuation and storage. These environmental measures will ensure that all surface water run-off from the new parking stands will be collected and released in a controlled and carefully managed way back into the local water system.

Other airfield works planned for the short-term include major overlay to the airport’s main runway, which is almost 27 years old. This is a sizeable project, which requires a substantial amount of planning. The project is scheduled to start later this year and is particularly challenging as the work – which is weather dependent – must take place at night and during a short timeframe to ensure the runway can be reopened for its first wave of airport operations the following morning. As a result, the main runway will close between 23:00 and 05:00. The work will continue for approximately 18 months.

If you want a closer look at the airports taxiway and runway infrastructure you can now do so thanks to goggle maps as Dublin Airport has become the first airport in the world to be on Google’s Street View. Thousands of images of the airport were captured to offer a 360 degree street level virtual tour of its runway system and airfield areas (see here).

In a comment Valentina Frassi, Programme Manager with Google said, “Whether you want to explore faraway sites or places that most of us would never otherwise get to visit, street view can let you virtually tour these places. “We’ve worked with Dublin Airport to help people to go beyond the window seat to tour the new runway and the surrounding airfields right from their phone, tablet or computer.”

Dublin Airport Managing Director Vincent Harrison said that in addition to offering the general public a virtual tour around other areas of the airfield as well as the four boarding gate piers servicing Terminals 1 and 2, the street view data of the Dublin Airport airfield will also be used in training, he added; “These new images will also help the airport’s Airside Safety Training department, as they will become an essential piece of the training suite in educating and familiarising all airport employees working around the airport’s airfield.”