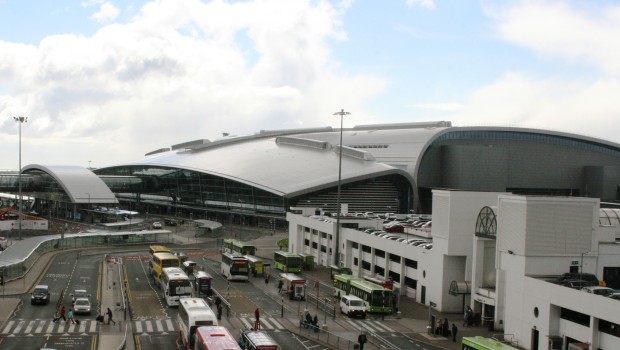 Dublin Airport is among Europe’s fastest growing airports, with a record 25 million passengers travelling through the airport during 2015. It was only one of the top performing airports in Europe during the year, according to new passenger data, from airport trade organisation ACI Europe. This data shows that Dublin Airport was one of the best performing airports in its Group 2 peer group, which comprises European airports welcoming between 10 and 25 million passengers per year. Dublin Airport had the third largest passenger increase within its peer group, behind Istanbul Sabiha Gökçen (19.7%) and Athens (19.1%).

Overall, European passenger numbers increased by 5.2% last year, according to ACI Europe, while traffic within the European Union increased by 5.6%. Aircraft movements increased by 2.2% across Europe in 2015. However, passenger numbers at Dublin Airport increased by 15% last year with an additional 3.3 million people using Dublin Airport during 2015. The expansion was fuelled by 22 new routes and extra capacity on almost 40 existing services. This gave Dublin its busiest year ever in the airport’s history ever, as a record 25 million passengers travelled through the airport during the year. 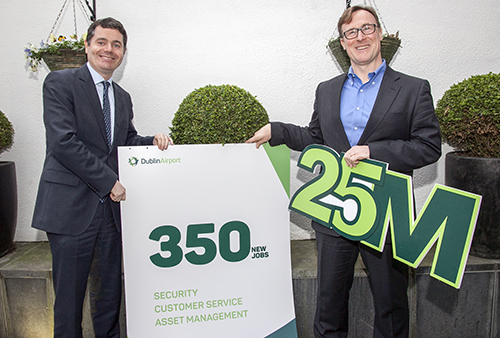 Dublin Airport Managing Director, Vincent Harrison said that the airport was expecting “passenger numbers to grow further at Dublin Airport in 2016 with the addition of 13 new routes and services as well as two new long haul charter destinations.” Dublin Airport already has direct flights to 170 destinations in 38 countries on four continents.

With the significant growth in traffic, new records were set at Dublin Airport last year for overall passenger numbers, and for European traffic, British traffic, transatlantic traffic, and traffic to other international destinations. Dublin Airport also set new records for transfer traffic, as a growing number of passengers are choosing Dublin as their transatlantic hub, and for the number of passengers availing of the US pre-clearance facility in Terminal 2.

Growth across all sectors

Long-haul traffic, which comprises passengers taking flights to North America, the Middle East and Africa increased by 19% last year, while short-haul traffic was up by 15%.

Passenger traffic to and from continental Europe, which is Dublin Airport’s largest market segment, increased by 15% last year to almost 12.8 million, which was a new record, thanks to new routes and extra capacity on existing services.

A record 8.9 million people travelled between Dublin and Britain by air in 2015, which was a 14% increase on the previous year.

This is a vital market for Ireland as trade between the Republic of Ireland and the UK is worth €58 billion per year, according to the British Irish Chamber of Commerce, comprising €32 billion of exports from Ireland and €26 billion of imports to Ireland.

Dublin-London is the busiest air route in Europe

Almost 4.5 million people flew between Dublin and London last year, which was a 9% increase for air traffic between the two capital cities.

Passenger numbers between Dublin Airport and the five London airports that are served by airlines operating from Dublin increased by 370,000 last year, with extra capacity on a number of routes.

Dublin-London is the busiest air route in Europe and the second busiest international air route in in the world behind Hong Kong-Taipei, which has more than 5 million passengers per year. “The London market, which is a key destination for Dublin Airport, had a very strong year in 2015,” said Mr. Harrison. 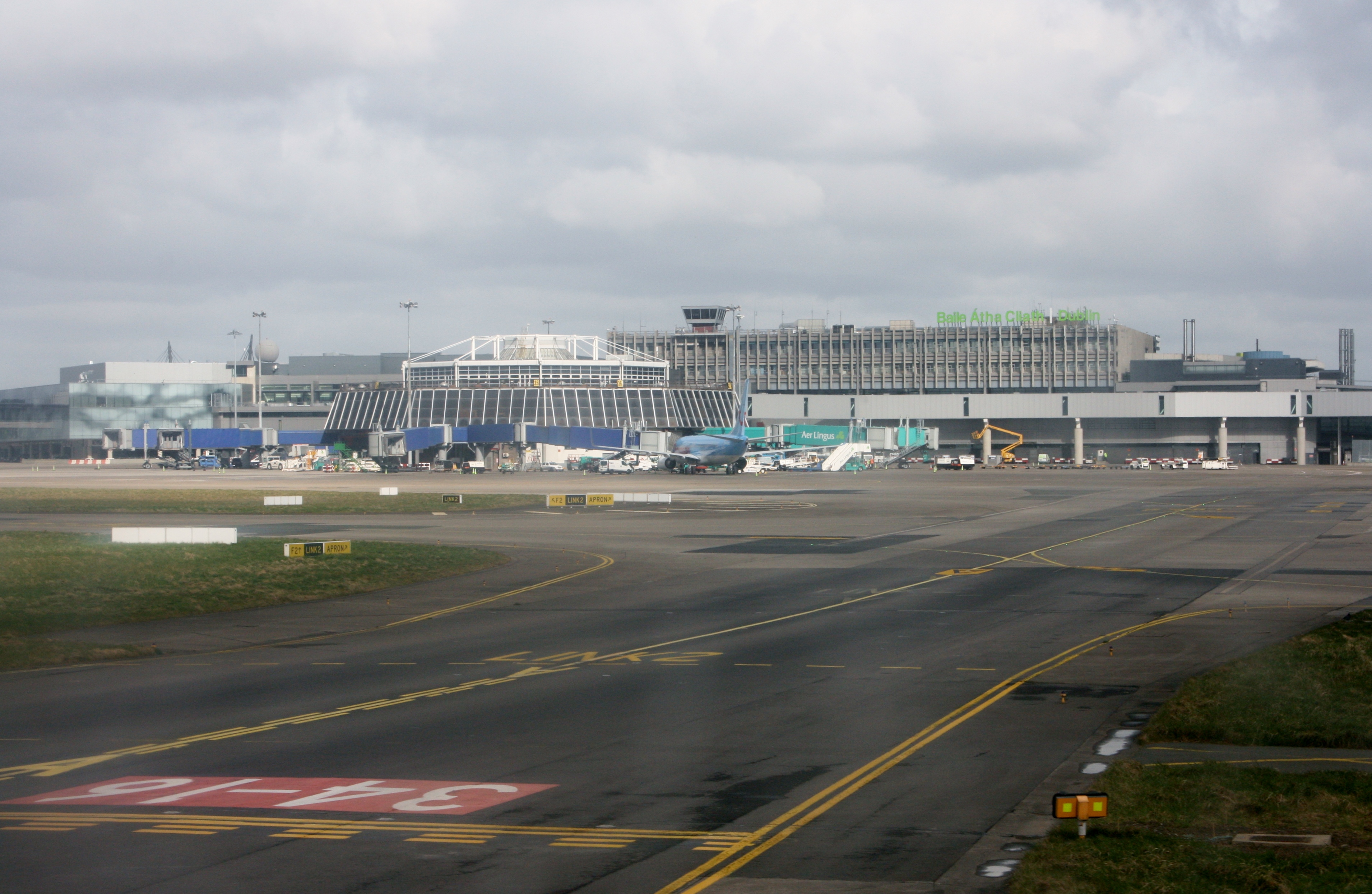 The Dublin-London route accounted for almost 18% of Dublin Airport’s total traffic last year and attracts a high degree of business travel. “A quarter of all of passengers on Dublin-London services are travelling for business, which is high by European standards,” Mr Harrison added.

“Dublin-London is one of world’s busiest trade corridors and Dublin Airport is delighted to help facilitate increased trade and travel between the two countries,” Mr Harrison noted.

There is also a strong leisure market as both Dublin and London are major tourist destinations.

“London is the most popular destination from Dublin Airport and has been for many years,” Mr Harrison said. “London is one of the great cities of the world and is hugely popular with Irish visitors either on holidays or visiting friends and relatives,” he added. “Dublin and its hinterland has long been a popular short-break destinations for British tourists and alongside other stakeholders Dublin Airport is supporting the new Dublin tourism brand to help grow that business and encourage visitors to explore more of the city and the region,” Mr Harrison said.

daa and other commercial partners such as Dublin hotels, the Guinness Storehouse, Brown Thomas, the Dublin Chamber of Commerce and Retail Excellence Ireland have contributed to a €1million marketing campaign in Britain, France and Germany that is led by Fáilte Ireland and also backed by the four local authorities in Dublin city and county.

The campaign aims to significantly increase visitors numbers to Dublin and tourism spend in Dublin over the next four years. 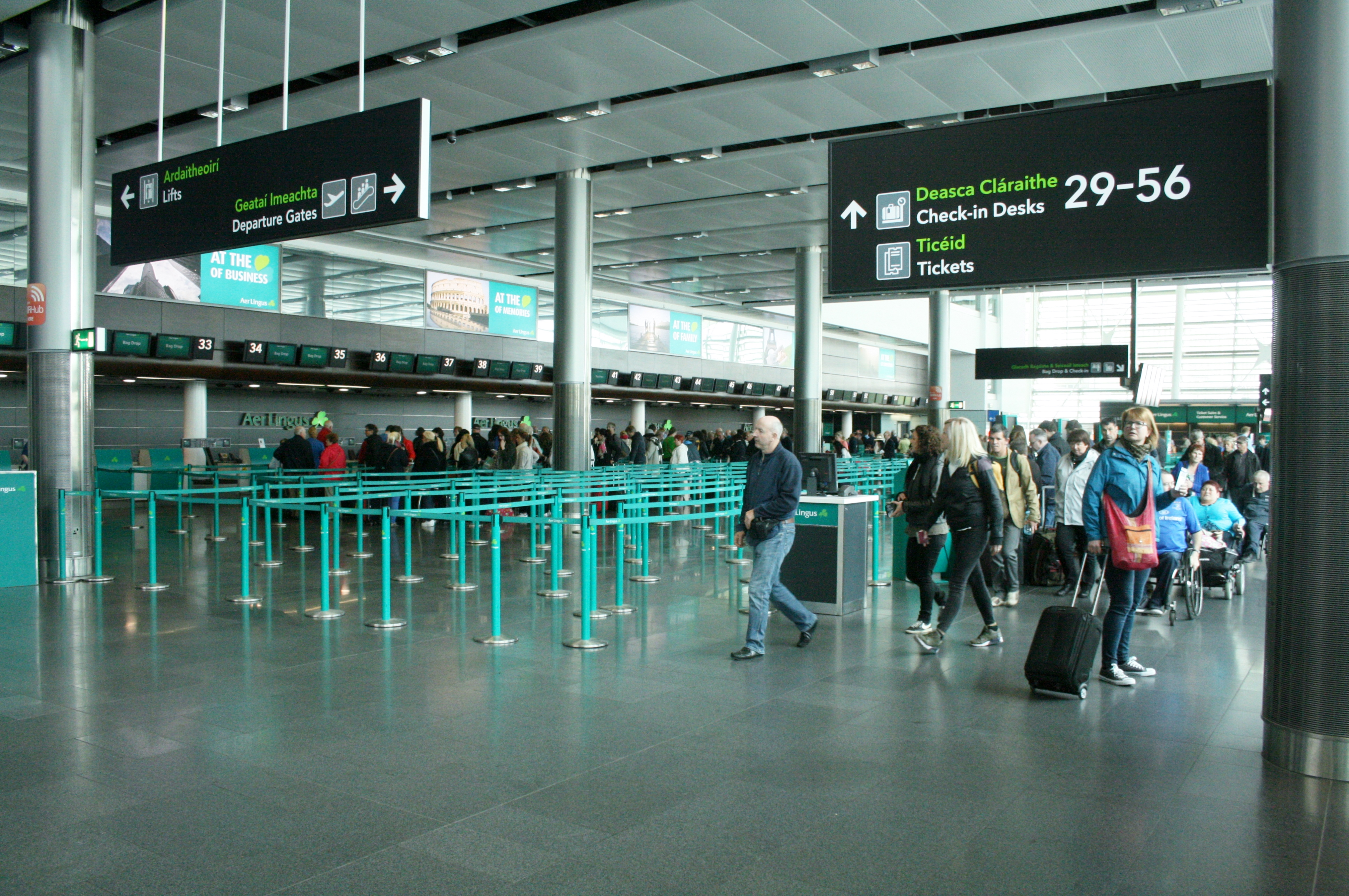 Dublin Airport check in at Terminal 2

With Transatlantic passenger numbers increasing by 17% to 2.5 million, more than one million passengers transferred or transited through Dublin Airport last year, making it a major Transatlantic hub. Transfer passenger numbers increased by 27% as Dublin Airport continued to become a significant hub for transatlantic transfers. “Growing Dublin Airport as a hub for transfers brings major benefits to the Irish economy,” Mr Harrison said. “A regular flow of transfer traffic underpins the economic viability of connecting long-haul and short-haul services, and also makes it more likely that Dublin Airport will add additional transatlantic routes and extra flights on existing services, thereby improving Ireland’s overall connectivity, which is hugely positive for tourism and trade.

”Between 2010 and 2015, transatlantic passenger numbers have increased by 66% at Dublin Airport and 15 new transatlantic services have been added”.

Dublin Airport is currently the only major airport in Europe to offer US Pre-Clearance, and this service is hugely convenient for US-bound passengers, according to Mr Harrison.

Dublin Airport an engine for growth in the Irish economy

Dublin Airport supports or facilitates a total of 97,400 jobs in the Irish economy and contributed €6.9 billion to the national economy, a major study by economic consultants InterVISTAS has found. The overall impact includes almost 16,000 people employed directly at the airport campus by daa, airlines and other companies, the multiplier effects that flow from that employment, and the other sectors of the Irish economy that are facilitated by Dublin Airport.

“Extra inbound passengers at Dublin Airport helped to bring record numbers of tourists to Ireland last year, and the opportunities offered to business by new routes from Dublin and additional choice on existing services similarly helped to boost trade and foreign direct investment, all of which are assisting our economic recovery,” the Minister added.

“Dublin Airport had a fantastic year of passenger growth in 2015, which is good news for the Irish economy, for tourism, and for job creation, both at the airport and in the wider economy,” according to daa Chief Executive Kevin Toland.

“We recruited about 170 new people last year and a further new 180 staff will be hired during 2016,” he added. “These additional staff are mainly in customer-facing areas, as we work to ensure that Dublin Airport continues to offer an excellent and efficient product to our passengers and airline customers as traffic increases,” he concluded.

Dublin Airport is also continuing to invest in upgrading its facilities. Improvements are being made to the departures and arrivals areas and security screening within Terminal 1 and an award-winning new retail and food and beverage area opened in T1 last year. Ten new aircraft parking stands will be completed before the summer, and an extension to the Terminal 2 multi-storey car park has been added to meet increased customer demand.

“We are constantly investing in the airfield and the passenger facilities to allow our customers to operate as efficiently as possible, and to provide a quality travel experience to the travelling public,” according to Mr Toland. 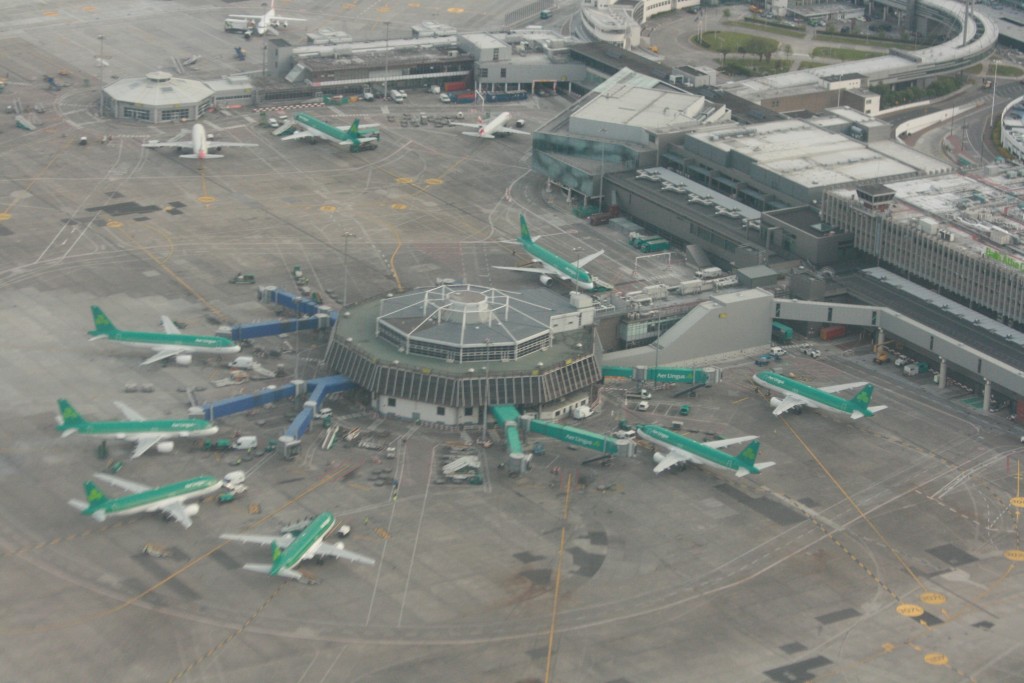 Dublin Airport is also currently evaluating plans for the development of a new runway, which will be an essential enabler for the Irish economy for many decades to come. A second parallel runway has been part of the Dublin Airport local area plan since the 1970s. Planning permission for a new runway was granted in 2007, but the project was put on hold due to the economic downturn. However, that approval constrains the number of flights that can be made between 23:00 and 07:00, which would be a severe barrier during the morning peak period, which is one of the busiest times for the airport and is one of the main reasons why an additional runway is required. The runway is already at full capacity between the hours of 6am and 7.30am and with many foreign airlines interested in adding early morning routes to and from Ireland, there is simply no more capacity available forcing airlines into taking later and later runway slots for their early flights.

While re-opening the planning process would be problematical and time consuming, it is essential that the daa gets the right project for its needs.

He believes that the night-time flight limitation is particularly problematic for international flights, noting that international passengers want to use Dublin as a gateway to travel elsewhere in Europe. “We need to make sure that when we build our runway, it’s one that will serve our needs for the next 20 to 30 years” he added.

The current Transport Minister Paschal Donohoe has also given his strong backing for the new runway at Dublin Airport. “We believe that, due to predicted demand that’s now very likely to occur at Dublin Airport, there will be a need for a second parallel runway,” said Mr Donohoe. However the daa would have to make a strong business case for the proposal he added.

IAG chief executive Willie Walsh is also in favour of the construction of a second runway at Dublin airport, which is likely to cost in the order of €250 million, saying it is currently at full capacity during peak hours, leading to “congestion and delays”. “We would also encourage the airport to look at utilising existing facilities as much as possible” he added.

The Commission for Aviation Regulation has capped Dublin’s passenger charges at €9.87 for 2016, but has ruled that if passenger numbers reach 25 million, the airport can pass on the cost of building the runway to customers and Mr Toland has indicated that this could raise passenger charges by around 60c a head. He stressed however that it was too early to say if that would happen.

Ryanair’s chief marketing officer, Kenny Jacobs, confirmed the airline, which had argued Dublin did not need a new runway, supported the plan: “We are always talking to the DAA and we have seen the plans and they make more sense than what we have seen in the past. We are supportive of the new runway but not if it is supported by higher airport charges.”