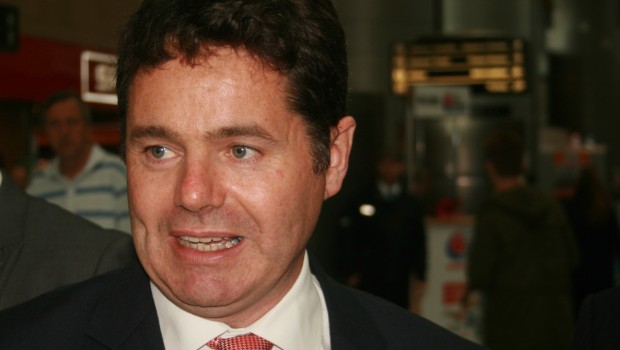 On 1st February, the Minister for Transport, Tourism and Sport, Paschal Donohoe TD, launched the National Civil Aviation Development Forum, at the headquarters of the Irish Aviation Authority in Dublin. The event was attended by representatives of airlines, airports, aircraft leasing companies, the public sector, academic institutions, and other bodies.

The idea for the National Civil Aviation Development Forum arose out of the consultation process leading to the development of the National Aviation Policy published in August 2015. That process was inaugurated at an open meeting hosted by the Irish Aviation Authority (IAA) in December 2012, attended by more than 400 stakeholders representing numerous interests in the Irish aviation sector. The National Aviation Policy, which was published in August 2015, confirmed that the Department of Transport, Tourism and Sport would enhance arrangements for consulting with the industry on the development of national policy and on influencing the development of EU and international policy affecting aviation in Ireland. The Policy acknowledged the need for cooperation and coordinated efforts of industry, education, government, regulatory and development bodies to make it happen.

The Minister welcomed the Forum as a new platform for policy makers, development agencies and stakeholders to collaborate in order to shape aviation policies and initiatives in the common interest of the sector. Recognising the contribution of aviation to the economy, the Forum will also seek to foster the growth of aviation enterprise in Ireland to support job creation and position Ireland as a global leader in aviation. 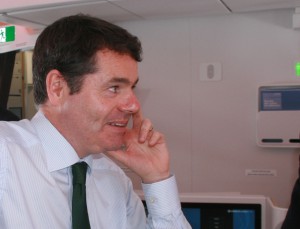 Opening the Forum Minister Donohoe said: “A strong aviation sector is essential for Ireland and does not simply expand as the economy does, but rather drives that economic growth. It connects us to the rest of the world. It supports tourism. It ensures our continuing attractiveness for Foreign Direct Investment and for job creation generally. The launch of the Forum acts on the specific commitment made in the National Aviation Policy that Ireland will establish a National (Civil) Aviation Development Forum led by the Department of Transport, Tourism and Sport and with appropriate representation across Government and the industry”.

The Minister congratulated the stakeholders for their contribution to the sector during his term of office which saw the Irish aviation sector grow from strength to strength.

“2015 was a year of particularly strong growth and record numbers for Irish aviation, with a record 1 million flights handled safely and efficiently through Irish air space and the North Atlantic, and with almost 30 million people using Irish airports last year. This aviation sector is absolutely crucial to our long term economic plan which will see the creation of more and better jobs that will make work pay, and that will generate the revenues needed to invest in our vital public services”, Minister Donohoe concluded.

In a separate development, the Minister officially launched National Drone Registration Day at an event in the Phoenix Park, Dublin on 18th January. National Drone Registration Day is intended to raise awareness that all drones over 1kg must be registered with the Irish Aviation Authority (IAA) and to encourage the safe use of drones. In December 2015, Ireland became the first country in the world to successfully roll out drone registration. Since the first full day of the site being operational, the IAA has had an overwhelmingly positive response with nearly 1,200 drones already registered. Registration can be completed online via the IAA’s website here for a nominal fee of €5 will apply and to register a drone, the registrant must be 16 years of age or older (Drones operated by those under 16 years of age must be registered by a parent or legal guardian). 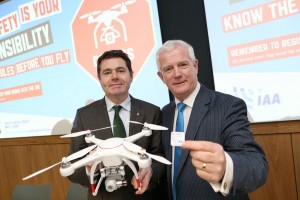 Minister Donohoe with Ralph James of the IAA

Minister Donohoe said: “Drone use is increasing exponentially in Ireland and nearly 1,200 have already been successfully registered with the IAA. The new register will help to safely integrate these small aircraft into the broader aviation system. The potential application for drones is truly incredible and the development of the drone industry in Ireland will have a very positive effect on the wider economy”.

Mr Ralph James, IAA Director of Safety Regulation, said: “We are tremendously happy with the response to drone registration so far and would encourage those who have yet to register their drones to do so as soon as possible. Drones are an exciting new area of aviation and we are working with industry to ensure that they are used safely and do not interfere with other forms of aviation. It is the responsibility of all drone users to operate them in a safe manner and we would ask that they familiarise themselves with the rules, which are available on the IAA website”.