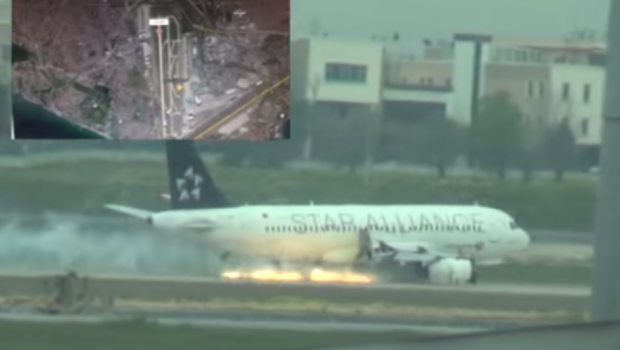 On 25th April, Airbus A320-232, TC-JPE, operated by THY Turkish Airlines, sustained substantial damage while landing at Istanbul-Atatürk International Airport, having operated flight TK1878 from Milan-Malpensa Airport in Italy. The aircraft, which is in the STAR Alliance colour scheme. had departed Milan at 07:00 hours local time (05:00 UTC), with 97 passengers on board. The flight was apparently uneventful until the aircraft made its approach to runway 05 at Atatürk at 10:23 hours local time (07:23 UTC). For reasons not yet determined, the aircraft rolled right just before touchdown. causing the right (IAE V2527-A5) engine and wing, to contact the runway with a hard landing. The landing was aborted, and the crew initiated a go-around, climbing to 3800 feet. Flames were observed coming from (near) the engine and the crew declared an emergency, due to the engine being inoperative. The aircraft positioned for an emergency landing on runway 35L and touched down on the runway at 10:41 hours local time some 20 minutes after the go around. The right main gear collapsed shortly after landing (see video below) and the aircraft skidded on its right engine before swinging to the right almost 180 degrees before coming to rest off the side of the runway. An emergency evacuation, via slides, was initiated, while emergency services attended and started to spray the aircraft. There were, fortunately no reported injuries, but the aircraft appears to be substantially damaged.

In line with our established policy Flying in Ireland will not speculate further on the incident, readers interested in following the unfolding events are referred here, to the Aviation Herald’s coverage, where Simon Hradecky has a good record of managing information in the public domain in a balanced way.