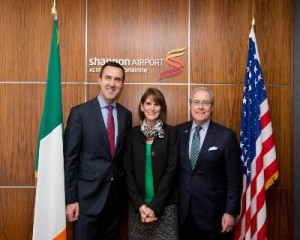 US Ambassador & his wife visit Shannon

The newly appointed US Ambassador to Ireland, Kevin O’Malley, speaking on an official visit to the airport 13th November, where he met members of its executive and board, has praised Shannon Airport for its key role in supporting the continuing and strong US multi-national presence in the West of Ireland. Accompanied by his wife Dena and members of his team at the US embassy, his visit to the airport was part of a four-day trip to the west and southwest of Ireland. Mr. O’Malley was sworn in as U.S. Ambassador to Ireland on 30th September and presented his credentials to President Michael D. Higgins on 8th October. Aer Lingus, United, Delta and American all fly out of Shannon operating to five US destinations (Boston, Chicago, JFK New York, Newark and Philadelphia) with daily Boston and Newark services year round. The Boston’s tourist spots makes it attractive and want people to visit.

Earlier on 10th November the Shannon Group announced the re-launch of Shannon Duty Free, taking it back to its original title, under which it was established almost 70 years ago, making it the first and oldest duty free in the world. Starting out from these humble beginnings, this pioneering initiative in Shannon spawned a world-wide industry with thousands of Duty Free Shops around the world now generating billions of euros in revenue annually. The re-launch sees the introduction of new signage and branding, a new supplier in the world renowned Gebr Heinemann, and new product lines and layouts are in the process of being implemented as Shannon Duty Free strives to establish a more effective, exciting and profitable retail outlet. Shannon Duty Free now offers an incredible 60 brands including top names in Irish and European products. 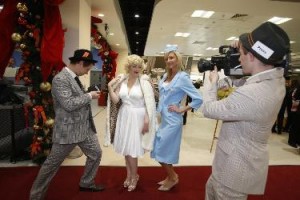 The re-launch of Shannon Duty Free

Shannon Airport’s strong momentum across 2014 has continued into the final month of the autumn, with passenger numbers for October showing a 28% increase on the same period twelve months ago.   The biggest gains in passengers through the terminal were again on European services, with eight continental services among the nine attractive new routes launched for the summer season (April through to end of October), the ninth a new Bristol service. This resulted in a 111% increase (from 20,347 to 42,950) in passengers to and from the continent last month compared to October 2013. Transatlantic passengers were up by 15% (from 23,511 to 27,108) thanks to the increased frequency across New York and Boston services this year, with Shannon’s biggest market, the UK, up by 6% (from 61,681 to 65,243). This followed growth in August and September which showed a 22% and 17% increase, respectively, on the same months in 2013. Traffic on cross channel routes was up 5% in August and 3% in September, on Continental routes 73% and 51% and on transatlantic 9% and 11%. Transatlantic passengers seem to have travelled more extensively than last year within Ireland as proportions visiting each of Clare, Cork, Dublin, Galway and Kerry all increased.

Shannon Airport has won a number of awards since the summer including the European Regions Airline Association top accolade for airport achievement just 10 days after a global award for marketing excellence and a few months after they won the Airport of the Year award at the Irish Aviation Awards. Its chairperson, Rose Hynes has been named the Limerick Person of the Month recently for her role in leading the turnaround at the airport since it was made independent in January 2013. Not so pleased is Tralee TD Arthur Spring who has heavily criticised the Shannon Group’s role in managing Kerry Technology Park. He says the legislation to establish and Independent Shannon Airport means that facility – a direct competitor with Kerry Airport – is threatening the viability of the business park in Tralee. However, latest Red C research at Shannon show that Kerry is the county benefiting the most from increased transatlantic passenger numbers at Shannon, with 39% of transatlantic passengers interviewed in the survey this year having holidayed in The Kingdom, up from 31% in the same survey last year.