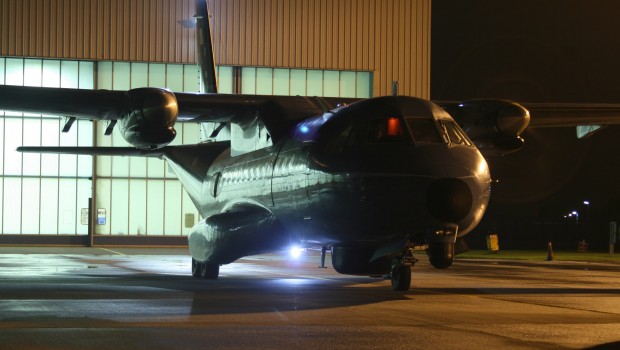 On 15th November, Air Corps CASA CN235 call sign ‘Irish 253’ transferred a young patient from Casement Aerodrome, Dublin to Heathrow Airport, London. The successful transfer marked their 100th Air Ambulance Mission of 2014. ‘253’ left its Baldonnel base at 17:30 and landed in the busy London airport at 19:00, where the patient was transferred to an NHS ambulance crew to complete the patient’s journey to hospital by road. This mission was a significant milestone for the Air Corps, in what has been a busy year for both national and international transfers of patients. Their ability to conduct multiple missions using fixed wing and rotary wing assets meant that on several occasions in 2014 multiple Air Ambulance missions were completed simultaneously. A good example of this was on 3rd November when two AW139 helicopters shared the helipad of Galway University Hospital, one was ‘275’ callsign Galway University Hospital ‘Medivac 112’ operating an Emergency Aeromedical Support (EAS) service flight with ‘279’ operating an air ambulance flight both transporting patients who required our assistance for their urgent transfer for medical treatment. At the same time ‘Irish 253’ was also transferring a critically ill patient to the UK at the same time. In the fortnight prior to the competition of the100th Air Ambulance Mission, the Air Corps had transferred three patients to hospitals in Ireland and four patients to hospitals in the UK and have been called on for international transfers to other European Countries during 2014.

The Air Corps EAS service operated by an AW139 helicopter based in Athlone which has been in operation since June of 2012 has also been extremely busy. Figures provided to Flying in Ireland show that the service completed 787 tasks from 3rd June 2012 to 30th September 2014. 299 of these tasks were completed in the first year to 30th June 2013, 394 in the second year to 30th June 2014 and 94 from 1st July 2014 to 30th September 2014. The Department of Defence recoups from the HSE the costs of the Air Corps’ participation in the EAS service In accordance with the terms of a Memorandum of Understanding. These include fixed costs, which are salaries and related personnel costs, as well as day-to-day operating costs such as, fuel and maintenance. The total costs recouped from the HSE from the commencement of the pilot to date amount to approximately €3.13 million.

On 13th November, the Minister for Defence, Simon Coveney told the Dáil that it had “been agreed in principle to maintain the service. What is being decided is how to do it and under what cost structure”. In order to allow time for a working group, chaired by the Department of Health and comprising representatives from the Department of Defence, the HSE and the Northern Ireland Department of Health and Social Services to complete its work, his Department has agreed to extend Air Corps participation in the pilot service. He added “the Air Corps has done a great job. We await the result of an implementation group on how we can provide the service into the future on a permanent basis”. “There is no reluctance at all” in providing the service “which everybody accepts has been a great success”. He concluded “we should wait and see what the implementation group proposes, how it proposes to fund it and how the structure will work, so we can have an air ambulance service for the west of Ireland that functions well on the back of the very successful pilot project. The Defence Forces are, and will continue to be, very supportive of the project”.