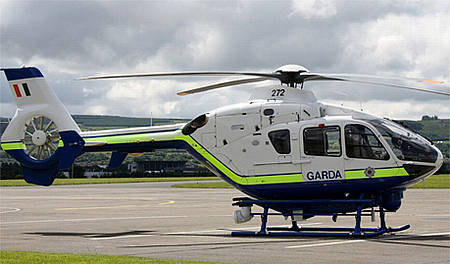 According to a report by John Mooney in the Sunday Times (26th October) the Garda Air Support Unit (GASU) fleet needs a €3 million refit and that additional funding had been requested for that purpose. Currently the cost of maintenance for the Britten-Norman Defender fixed wing aircraft and the cost of fuel for the GASU as a whole is borne by the Air Corps. The cost of maintaining both EC135 helicopters is borne by the Garda budget. In 2014 a sum of €309,173 is provided under sub-head A.7 – ‘Aircraft’ for this purpose. According to this report the work was needed to address issues which have been affecting operational effectiveness of the Defender in particular, which it was claimed was “virtually grounded as it cannot be used for policing operations.” Much of its surveillance equipment was said to be no longer operational and the aircraft had been grounded for long periods at a time. The report quoted senior Gardai as saying that the two Eurocopter EC135s “urgently need new equipment to enable them to perform extra functions and operate more efficiently”. While the Department of Justice and Equality refuse to provide detailed information on the Garda Air Support Unit “for security and operational reasons”, the Department of Defence and Defence Forces Annual Report shows that GASU flew 1,156 missions and 1,226.68 hours in 2013. The figures were similar in 2012 when the Defender flew some 13.2% of the 1,188.15 flown.