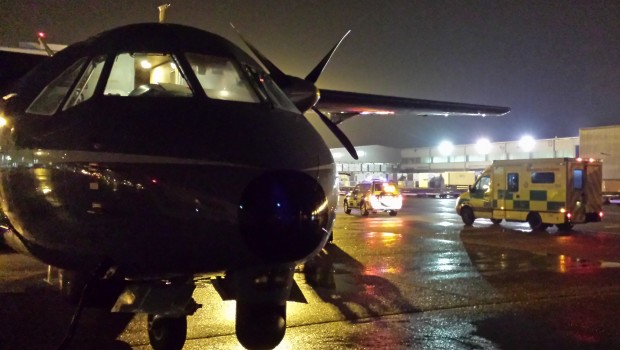 On 26th October Air Corps CASA CN235 call sign ‘Charlie 253′ was tasked to provide ‘top cover’ to the Irish Coast Guard Sligo based S-92A which responded to an injured fisherman got into trouble on a fishing vessel around 230 miles North West of Sligo near Rockall. The weather was stormy, with winds of over 50 knots and swells over 20 feet and after multiple attempts at winching the casualty, the crew was forced to abort the mission at 06:50 hours. With no other options the trawler had move closer to the coast and the helicopter having refuelled at Blacksod, had arrived overhead the trawler at 11.50 and was able to winch the casualty, who had suffered serious injuries, on board and brought him to Sligo Hospital. The CASA CN235 had arrived on-scene at 07.00 and kept a watchful eye of the helicopter as it routed ashore and co-ordinated with Air Traffic control and the Coast Guard for a speedy transfer of the patient. This was a typical mission for 101 Squadron, the Air Corps’ Maritime and Surveillance Squadron, which operates in a very demanding environment that requires well developed teamwork amongst all the crews involved, in the air and on the ground. In addition they have completed over 230 patrols protecting Ireland’s vital natural resources at sea. The unit also played a pivotal role in the Maritime interdiction operation of the sailing vessel ‘Makayabella’ off the south west coast in the early hours of 23rd September which resulted in the seizure of a significant quantity of suspected controlled drugs (believed to be 1,000 kgs of cocaine) and their role supporting LÉ Niamh and LÉ Róisín, during the operation was acknowledged by the Minister for Defence Mr Simon Coveney.