Aer Lingus has posted its first operating profit since the Covid-19 pandemic. Their Quarter 3 2022 performance published this week

The owners of Aer Lingus, the IAG Group have confirmed an order for a further 37 Airbus A320neo aircraft. The

The Chief Commercial Officer at Aer Lingus is to leave the company and take up a position at IAG Cargo.

In an announcement by IAG on Monday morning, the Aer Lingus Chief Executive and Chairman is to become the new

EUROCONTROL’s Aviation Hardtalk Live: The latest views from aviation’s key players. How can we build back better European aviation after 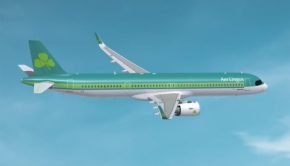 Aer Lingus have announced planned changes to North American services for summer 2019, due to A321LR delivery delays. The Dublin-Montreal