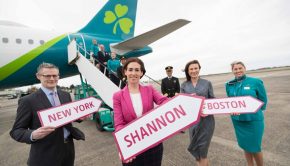 Fury in Cork as Norwegian Route to Boston Axed next Winter