EasyJet has celebrated the launch of the first flights on its seasonal winter route from Belfast City to Glasgow, providing

Emerald Airlines, the operator of Aer Lingus Regional, is seeking experienced Captains to join its growing team in Belfast. The

Belfast City Airport Hailed as the UK’s Most Punctual Airport

Dublin Aerospace, the aviation maintenance company headquartered in Dublin, has announced it has expanded its line maintenance division to Belfast

Emerald Airlines, operator of Aer Lingus Regional, expands its services from Belfast City Airport, with new routes to Glasgow and 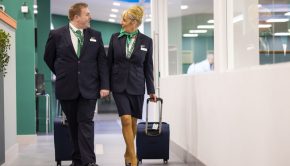 Emerald Airlines is looking for friendly, hands-on, and professional people to be the face of the airline as it embarks

FlyBe Selects Belfast City as a New Base