On Tuesday morning (June 12th), Hainan Airlines operated the first of a new year-round service from Beijing to Dublin. The 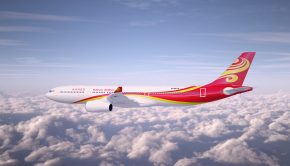