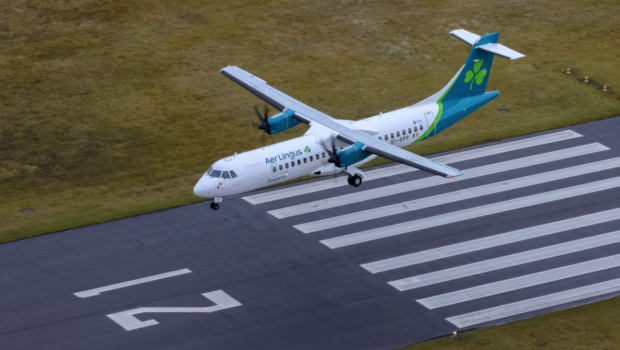 Emerald Airlines operating as Aer Lingus Regional has added more routes from Dublin Airport as its fleet expands. New Routes from Exeter Airport and Cornwall Airport in Newquay have been added this week with five and four services weekly respectively. These new routes from the southwest UK airports will allow for passengers to have seamless travel to the United States and Canada by availing of US pre-clearance at Dublin. Passengers flying to the US can buy a single ticket which includes baggage transfer and allows them to avail of the US Immigration Pre-clearance at Dublin Airport before they fly. Inbound passengers are treated as domestic arrivals in the US, so avoid any lengthy immigration queues when they land stateside, simply pick up their bags and go.

Commenting on the new service between Dublin and Exeter, the Exeter Airport managing director, Stephen Wiltshire said, “We’re thrilled to see the start of flights from Exeter to North America via Dublin. They open up a range of transatlantic destinations and regional air travel to Ireland for leisure and business passengers. We’re also seeing overseas bookings from people in Ireland and North America keen to explore Devon and the South West. So we expect the new route to be a boost for inbound tourism as well.”

Commenting on the new service between Dublin and Newquay was the Managing Director at Cornwall Airport Newquay, Sam O’Dwyer who said, “We’re delighted to welcome Emerald Airlines as our first new airline to Newquay this year and to be operating this very popular route between Ireland and Cornwall. It’s a welcome sight to see Aer Lingus Regional here at Newquay and we look forward to working with Emerald Airlines to develop the partnership further in the coming years. This hugely popular route between Dublin and Newquay will undoubtedly be welcomed on both sides of the Celtic Sea.”

All Emerald Airlines flights are operated by the ATR72-600, the latest generation of turboprop aircraft combining unmatched environmental and economic performance. These ultra-low fuel burn aircraft emit up to 40% less CO₂ on these short, regional flights. Emerald has recently taken delivery of their ninth aircraft with more due on delivery in the coming weeks