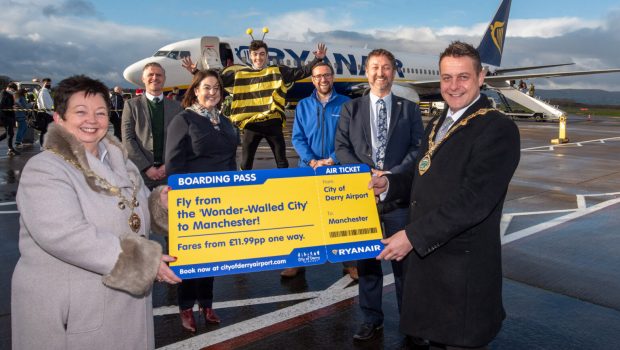 City of Derry Airport welcomed Ryanair back to the North West on Wednesday 1st December, for the inaugural service to Manchester Airport. The Mayor of Derry City & Strabane District Council, Alderman Graham Warke, President of Londonderry Chamber of Commerce, Dawn McLaughlin, Head of Regions at Tourism NI, Ciaran Doherty, and Head of Functions at Ryanair, Frazer McKinstry, joined the celebrations at the airport where the inaugural passengers were treated to a fun-filled afternoon of Manchester themed refreshments, giveaways and live musical entertainment to mark the special occasion!

Steve Frazer, Managing Director at City of Derry Airport, expressed his delight: “We are thrilled to have Ryanair back in the North West and providing such an important service for the local catchment area. A Manchester flight has been in demand for some time and we are proud to now provide this vital connectivity for corporate passengers and students who commute regularly and reuniting family and friends. Not to mention the offering of convenient leisure breaks to this action-packed destination; from football, shopping, nightlife, culture, history to family fun – Manchester has something to offer for everyone!”

Karen Smart, Managing Director of Manchester Airport, said: “It’s great to see Ryanair flights to Derry/Londonderry launch from Manchester Airport: “The route will offer our passengers here in the North of England a great opportunity to visit a different part of Northern Ireland. For inbound passengers, as well as exploring what the North of England has to offer, the route will allow people easy access to our long-haul network out of Manchester.”

Mayor of Derry City & Strabane District Council, Alderman Graham Warke, added, “I am delighted that Ryanair aircraft has made a welcome return to the runway of City of Derry Airport to offer affordable and convenient connectivity to Manchester.

“It fortifies the link between our region and Manchester where many local people do business and have friends and family living there.

“There is lots to see and do in Manchester if you are planning a city break and we can promise visitors from England the experience of a lifetime if they are travelling to the North West for business or recreation.”