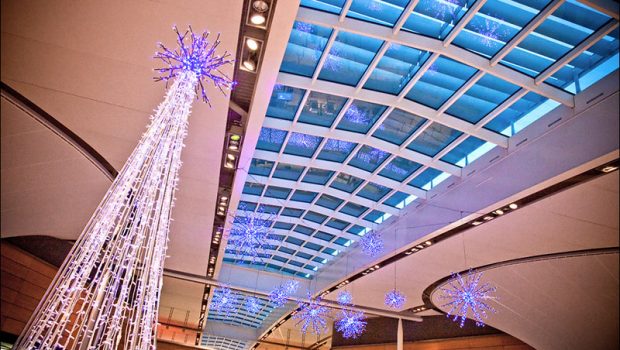 850,000 Passengers To Fly Through Dublin Airport This Christmas

From Friday, 17th December to Tuesday, 4th January, 2021 there is expected to be an average of 45,000 departing and arriving passengers each day, which compares to an average of 12,000 passengers per day over the Christmas season last year, and 77,000 per day during the same period in 2019.

The busiest day during the Christmas season is expected to be Sunday 19th December, followed closely by Thursday 23rd December. With new travel restrictions recently introduced by the Irish government for arrivals into Ireland, this has made passenger forecasting more difficult than a typical pre-COVID-19 Christmas so final passenger numbers may vary if passengers decided not to travel that have already booked.

Face masks are mandatory at the airport and must be worn when in the terminal buildings. In addition, social distancing protocols should be observed and there are more than 1,000 hand sanitisers located throughout the Dublin Airport campus.

In line with Irish Government and European Union Aviation Safety Agency (EASA) guidelines, access to the terminal buildings is limited to passengers, crew and airport staff. Dublin Airport will close on Christmas Day – the only day on which it closes every year – however a number of staff members will remain on duty that day, including the airport’s emergency fire service personnel and Airport Police.

Flight operations will cease on Christmas Eve. The last flight to depart is an Air Moldova flight to Chișinău at 11.10pm and the final arrival is an Aer Lingus flight from Tenerife, which is due to arrive at 11.35pm. The airport will reopen on St. Stephen’s Day when a TAP Air Portugal flight from Lisbon arrives at 03.05am.

Kevin Cullinane, Group Head of Communications at daa, the operators of Dublin and Cork airports said: “Every effort was made to put an entertainment schedule in place, and we would like to thank all those that volunteered their talents and services in a bid to make it happen, but unfortunately, due to COVID-19 guidelines, Dublin Airport is unable to host its Christmas music programme this year.”

“However, everything lies in readiness for Santa’s flight plans this Christmas Eve. We are maintaining close contact with the Irish Aviation Authority (IAA) to monitor Santa’s progress over Irish air space, and to ensure that his reindeer are assisted with a smooth landing. There will be no flights on Christmas Day to make sure Santa has the skies to himself as he approaches Ireland from the North Pole after midnight on Christmas Eve. Everyone can help ensure he maintains social distance by being tucked up early for bed on the night and stay fast asleep”, Kevin Cullinane added.

“We would like to take this opportunity to wish all of Dublin Airport’s passengers, staff, airline partners, business partners, supporters, neighbours and friends a very happy and peaceful Christmas, and a healthy and prosperous New Year,”.