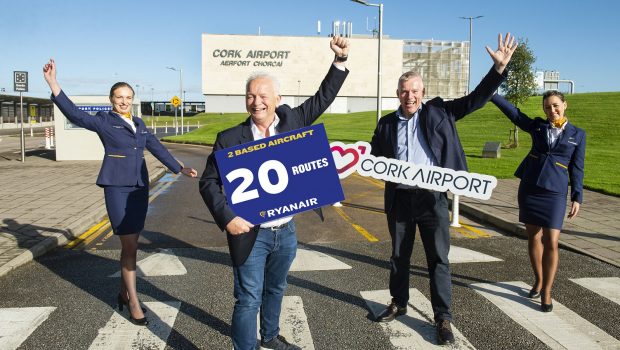 Ryanair has announced today that it will reopen its base at Cork Airport and restore its services to 100% of the pre-pandemic levels for the Summer of 2022. The airline will base 2 aircraft at the airport and the investment of $200m will boost Cork routes served by Ryanair to 20 including the introduction of new services to Birmingham and Edinburgh which are unserved following the collapse of Stobart Air.

Cork Airport and the DAA have worked closely with Ryanair over the last number of months, to extend the traffic recovery scheme to the end of October 2022 to incentivise Ryanair traffic to return to pre-pandemic levels. Ryanair has responded by reopening its base and restoring its traffic at Cork in full for Summer ‘22. This is fantastic news for Cork Airport and the entire Southwest region, as the restoration of the 2 aircraft base will secure 60 Ryanair jobs and deliver thousands of tourism jobs in the Cork area. Ryanair has now announced that it will restore traffic to pre-pandemic levels for next summer in Cork, Shannon, Knock, and Kerry airports. This coming winter, Ryanair will serve six destinations in the UK, Alicante, Malaga, Lanzarote and Tenerife in Spain along with Gdansk and Poznan in Poland. These will all be continued through the summer along with additional routes to Spain, France, Italy and Portugal.

Commenting in Cork at the announcement of the new routes, Ryanair CEO Eddie Wilson said, “Ryanair is delighted to confirm the reopening of its two aircraft based at Cork Airport. This $200M investment secures 60 Ryanair jobs at Cork, but more importantly, restores passenger traffic at Cork to pre-pandemic levels for Summer ‘22.  Cork along with Shannon, Kerry, and Knock have had their Ryanair traffic fully restored to pre-pandemic levels of capacity ensuring the recovery of tourism, jobs, and connectivity. Unfortunately, traffic at Dublin is set to fall by up to 35% next summer as the DAA traffic recovery scheme does not have the required funding from the Government to incentivise traffic recovery for the entire summer season ending in June instead of October. We call on Eamonn Ryan the Minister for Transport to urgently confirm the extension to the current DAA scheme until October ’22, similar to the scheme at Cork Airport. This extension of the traffic recovery scheme will ensure that Ryanair will fully restore all of its pre-pandemic capacity at Irish airports in preparation for Summer ‘22, securing Ireland’s tourism industry, and the thousands of jobs that depend on air  connectivity.”

Also commenting was the Managing Director at Cork Airport, Niall MacCarthy who said, “I am delighted with today’s announcement by Ryanair reopening their base at Cork Airport in December. Twenty routes on sale from Cork Airport on the Ryanair website will ensure that Christmas 2021, Spring and Summer 2022 contains lots of travel options for our passengers. Outbound sun and city breaks and inbound visitors from the UK and Continental Europe is good news for jobs in aviation, tourism and hospitality and the rebound of our economy in 2022.”