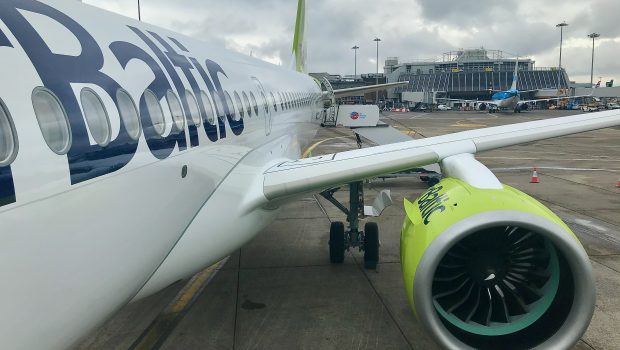 Flying In Ireland was invited to take a close-up look as Airbus brought the Airbus A220-300 to Dublin on the first leg of a European sales tour this week. The aircraft was in the colours of Air Baltic having been delivered new on 29th August. The Airbus A220 family can cater for the 100-150 seat market with the A220-100 offering 100-120 seats and the larger A220-300 catering for the 120-150 seat market. Unlike its predecessors in the single-aisle aircraft market, the Airbus A220 came from a ‘clean-sheet design’ in the 21st century. Initially launched in 2012 with the first flight of the A220-100 coming in 2013 and the -300 following with its first flight in 2015. Swiss became the launched customer of the -100 and have taken delivery of 30 aircraft of both variants. Air Baltic placed their order in 2012 and was the first airline to take delivery of the -300 series in 2016 with the aircraft going into service on the Riga – Amsterdam route. The aircraft brought to Dublin by Air Baltic on behalf of Airbus was their 30th delivered with the 31st being delivered as the event in Dublin was taking place. Air Baltic will take another later this month, with eight more to follow next year and the possibility of further options being exercised too.

Airbus has received 643 orders for the A220 family aircraft with 173 delivered so far. They are currently delivering five aircraft per month, expanding to six per month in 2022 and ramping up to 14 per month by the middle of the decade. The aircraft has been delivered to operators in all sectors with legacy airlines, low cost, start-up’s, full-service airlines, leasing companies and the corporate version was launched last year with an order from Comlux Aviation.

During the presentation to the media, the CEO of Air Baltic Martin Gauss was on hand to talk about the success of the Airbus A220 in service with the airline. Since the airline started taking delivery of the A220-300 aircraft, Martin who is also a pilot said the aircraft has exceeded expectations. Since its introduction, the aircraft has range 2% better than the brochure and better per seat and per-trip costs. The aircraft is 21% better fuel efficiency than their older Boeing 737 classics and the aircraft is up to 3% lower than the marketing claims made by Airbus. Air Baltic had originally planned to become an all Airbus A220-300 airline in the years ahead but the pandemic forced the airline to make an ‘ad-hoc’ decision to bring forward the end of their Boeing 737 and Q400 aircraft operations. The Boeing’s have been sold while the Q400s remain stored in Riga pending the end of the lease agreements. Mr Gauss praised Airbus for having the aircraft ‘ready for service’ upon delivery with one aircraft entering service just 56 minutes after its delivery flight from the Airbus factory at Mirabel in Quebec. He continued to talk about the ‘ideal fit’ that the Airbus A220-300 makes for the Air Baltic network. While the airline operates some short domestic flights of just 25 minutes between Riga and Liepāja, the airline also operates the longest sector for an A220 with the soon to be launched four times weekly Riga – Dubai route which can take almost seven hours. The airline has previously operated to Abu Dhabi and the aircraft can operate unrestricted with a full load of passengers and fuel from the Middle East even in summer with high temperatures.

Following the briefing, it was time to have a look at the aircraft on the ramp. The aircraft, YL-ABD (c/n 55129) was delivered in August and still had the ‘new aircraft’ smell on board. First a look around the outside, the wing area is made of composites and are manufactured in Belfast by Spirit AeroSystems. The engines are the Pratt & Whitney PG1000 which are also used on the larger Airbus A320neo family of aircraft. The braking system used is an all new electric design that also helps to reduce wear and tear on the tyres. Onboard the cockpit is very much a pilot-friendly design with four LED screens and side-stick controls.

The cabin is laid out in 2-3 configurations with an 18.5-inch seat width. The windows are the biggest of any single-aisle aircraft and the cabin is designed to have straight sidewalls for more comfort, the headroom is increased and the overhead storage bins are also among the biggest available allowing every passenger room for at least one standard size cabin bag to be placed overhead. The centre seat is actually wider than the aisle or window seat but on the Air Baltic fleet, this seat is not sold in Business Class to allow passengers more space. Each seat has a fold down table and only a small seatback pocket. The aisle is wider than other single-aisle aircraft to allow for passengers to pass when cabin crew are doing food service.

Airbus had arranged for a demonstration flight to show off the aircraft capabilities to a number of interested parties. Being in Dublin, these included several of the worlds largest leasing companies. While no new orders were announced on the day, it is likely these will come in the weeks and months ahead. After making the taxi out to RWY28L at Dublin, a short takeoff roll the A220 was airborne, heading out west and into the cloud. Even on the takeoff roll, it was noticeable how quiet this aircraft was for the passengers on board. Climbing swiftly to FL200 (20,000 ft), the route took the aircraft towards Limerick, circling back across towards Carlow and then beginning descent out over the Irish Sea and swinging in for landing again on RWY28L. During the brief 45 minute flight, there was time for the cabin crew to serve drinks and some savoury snacks to the assembled guests on board.

Although the Airbus A220 has been in airline service for over five years now with 173 airframes delivered to eleven operators, it is still considered a new aircraft and has many advantages over its competitors in cost, design and passenger comfort. The Airbus A220 will be around for a long time to come.