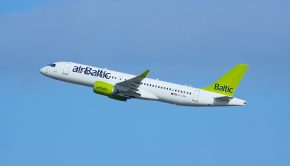 Latvian airline Air Baltic will operate a new route to Dublin from their base in Vilnius, Lithuania starting on 16th