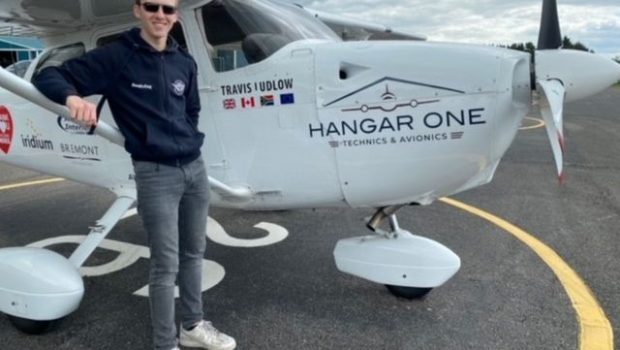 As we reported last week, 18-year-old Travis Ludlow arrived in Ireland as part of his Round the World Flight. Although he was delayed by a couple of days due to poor weather on the East Coast of the United States, Travis arrived at Donegal Airport on Tuesday evening from Barra in Scotland. Having left White Plains in New York on Friday morning, he travelled to Montreal, Saguenay and Goose Bay in Canada before starting the transatlantic crossing to Narsarsuaq in Greenland and then on to Reykjavik in Iceland. Following an overnight stop there on Monday, the flight completed the ocean crossing with a stop in Scotland before heading down to one of the world’s most scenic airports in Donegal. Unfortunately, the weather didn’t allow him to enjoy the sights on his arrival as the weather was close to minimums when he landed just before 7.00 pm. He was greeted by a water cannon salute from the fire service.

After an overnight stop in Donegal, he made the relatively short hop down to Cork Airport for another night stop, arriving at 12.40. Travis was given a real Cork welcome when his aircraft was escorted onto the parking stand by the Airport Police Fire Service where he was met by the Airport Duty Manager Padraig McCarthy and Josh O’Regan from Weston Aviation.

Travis is scheduled to continue on to Northern Spain on Thursday and is planning to finish the Round-The-World trip next Sunday making him the youngest person to fly solo around the world. For the latest updates about the flight, visit https://aroundtheworldsolo.co.uk/ and for live position reports, you can click here.