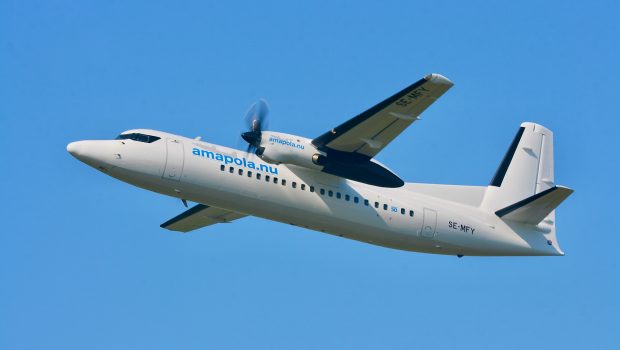 The new operators of the Public Service Obligation (PSO) route between Donegal and Dublin took off this morning flying a 50 seat Fokker 50 aircraft. The awarding of the contract to Swedish Airline, Amapola Flying, was made for a short term of seven months following the collapse of Stobart Air in June. A four-year contract will be awarded following a full tender process which is expected to get underway in the coming weeks. The contract was awarded to Amapola on 15th July by the Minister for Transport, Eamon Ryan.

The aircraft being used for the route is a 1987 built machine initially for DLT in Germany. The aircraft went on to operate for Lufthansa Cityline, Air Nostrum in Spain and then spent time in Belgium with VLM and Air Antwerp. The PSO contract calls for a twice-daily service on the route with an early morning departure from Donegal at 08.20 on weekdays with a 09.05 arrival in Dublin. The afternoon service leaves Donegal at 16.40. The departure times from Dublin are 15.10 and 18.20. The weekend departures from Donegal are at 10.25 and 14.25. Departures from Dublin will be at 13.05 and 15.40 on the weekend.

The aircraft, SE-MFY (c/n 20109) used on their initial services positioned from the company’s base in Malmo to Dublin arriving shortly before 14.00 on Sunday afternoon. The aircraft positioned on to Donegal Airport in Carrickfin later in the afternoon in readiness for the first service. Flights can be booked on the airline’s website here.