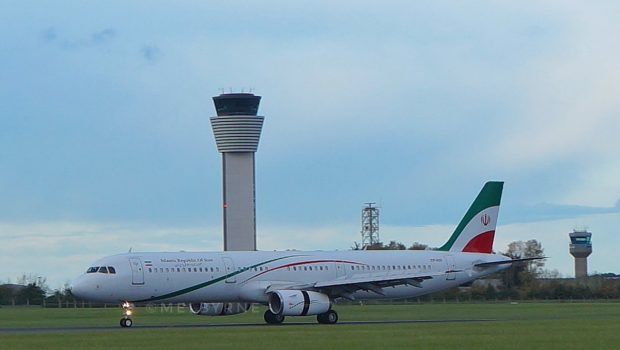 Dublin Airport received an unusual visitor on Tuesday evening when the Foreign Minister from the Islamic Republic of Iran arrived for a 24 hour visit. Mohammad Javad Zarif and his entourage arrived on an Airbus A321, EP-IGD from Rome around 8.00pm. The visit is the third stop on a European tour where the foreign minister has already visited Madrid for talks with their Spanish counterparts. During the stop in Rome, Mr Zarif had an audience with the Pope in the Vatican as well as meeting Italian Government officials and business leaders.

During the visit to Dublin, The Iranian delegation will meet with the Irish Minister for Foreign Affairs, Simon Coveney as part of Ireland’s role on the UN Security Council where Ireland is serving a two year term. The delegation from Iran will also meet with the Taoiseach and President during the short visit.

The aircraft was built in 2000 and initially delivered to Monarch Airlines in the UK. The aircraft spent three years with the UK airline before going to Livingston Airlines in Italy. Following a period of storage from 2003 until 2005, the aircraft was acquired by Meraj Airlines in Iran on behalf of the Government and has been operating diplomatic flights since then and received a new colour scheme in the past year.