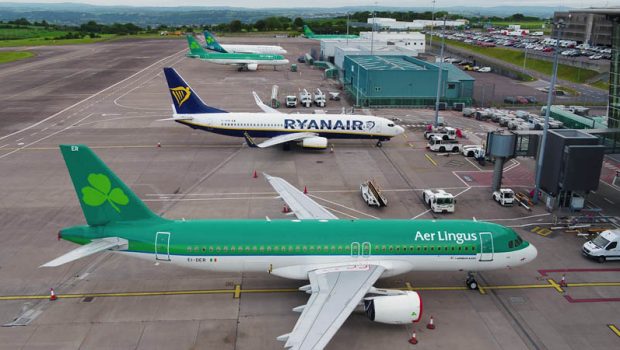 Cork Airport had just over 10,000 passengers pass through its doors in the first quarter of 2021. This is down 97% on the 400,000 that travelled through the airport in the first three months of 2020. Cork Airport had seen a 6% increase in both January and February 2020 on the previous year and then the COVID-19 began to impact on traffic figures from mid-March 2020.

Aer Lingus has maintained its service on the Cork-London Heathrow route throughout 2021, with frequency typically at three flights per week. KLM operated in January and after pausing briefly on foot of increased Dutch Government travel restrictions, returned to Cork in March, operating three times per week to Amsterdam. Both Aer Lingus and KLM plan to continue these services in the months ahead. Ryanair operated some limited flights in early January to London-Stansted, Gdansk and Katowice to cater for post-Christmas demand.

A total of 8,893 passengers flew on scheduled commercial flights in the period, while 1,180 passengers flew in and out of Cork Airport on various general aviation flights including search and rescue operations, transplant flights, Aer Corps and Garda aircraft, business jets, medical evacuations and helicopters serving the offshore gas rigs off the South of Ireland. Just 41% of the seats available on scheduled flights from January to March were filled on the 146 scheduled flights that operated in the period. 86 flights on the London route, 52 flights on the Amsterdam service and eight flights to/from Poland in the first week of January.

Due to the low passenger numbers predicted for this year, the airport has decided to press ahead with the much needed upgrade works on the main runway. It will be the largest construction work at the airport since the new terminal opened in 2005. The works on the main runway will take place over a 10-week period from mid September until late November. The airport’s only jet capable runway has been in operation since 1961. It was originally 1,883m long and was extended by a further 300m in 1989. Since its construction, the runway’s only overlay was in 1999. This was completed on the original runway element only. Therefore, the pavement on the original runway is now 21 years old and the extension is 31 years old.

A runway that is in constant use 24/7/364, degrades over time. Cork typically has more than 22,000 commercial landings annually and also facilitates thousands of smaller aircraft each year. Over time, the busy runway will develop deep structural cracks and the runway deteriorates significantly with Foreign Object Debris (FoD) becoming an ongoing potential hazard. the initial plan was for the works to be carried out from late 2022 until the Summer of 2023 to take place at night. By bringing these important works forward to a period when the airport will be quiet, it will cause less disruption and they can be completed in a quicker time frame allowing for increased traffic at the busy Christmas period and the expected return of all their customer airlines in 2022.