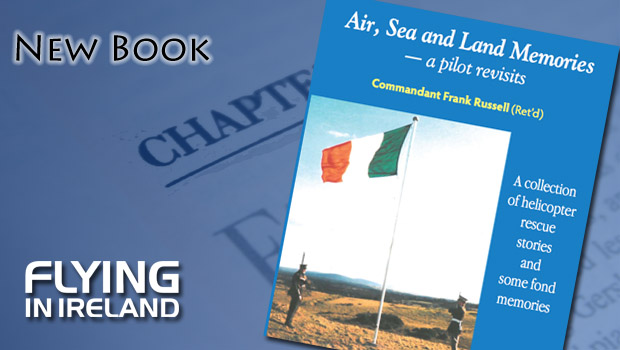 Motivated by what to do in the latest Covid19 lockdown, former Irish Air Corps helicopter pilot and Air Accident Investigation Unit Investigator Frank Russell has just self-published a book of memories and pictures entitled: “Air, Sea and Land Memories – a pilot revisits”.

“Naturally enough, some of the stories involve me in Air Corps missions, both Air Ambulance and Search and Rescue…with some interesting outcomes! However, my stories are not confined to Ireland, it’s a big world out there and I tried to capture a tiny flavour of it for posterity.”

“The book is available at Hayes Print, Ennistymon, Co Clare. You can contact them on 065-7071125 with your name and address/ credit card details. Cost is €20 +P&P. All the proceeds of this book’s sale will be donated to the LARCC Cancer Support Centre (www.cancersupport.ie) in Multyfarnham, Co Westmeath…of which I am a Co-Founder. The ongoing support of cancer patients is even more critical in these lockdown days.”