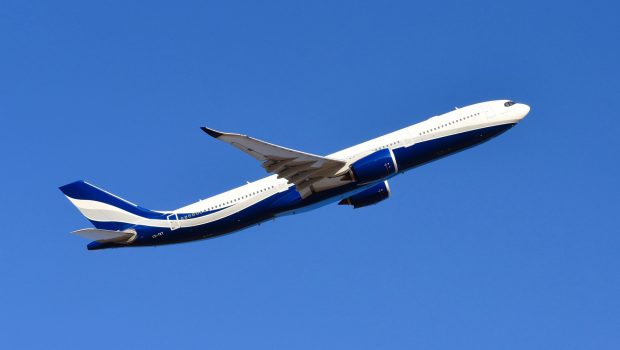 Following on the first visit to Dublin last week of the Airbus A350-1000, this week it is the turn of the Airbus A330-900 to pay the first visit to Dublin. The Airbus A330-900 made a visit arriving from Manchester on Friday morning shortly before 10.00 am and returning to Manchester two hours later. The aircraft operating this flight is a Portuguese airline Hi-Fly. They have no scheduled operations but specialise in worldwide aircraft leases and ACMI (Aircraft, Crew, Maintenance and Insurance) services on medium to long term contracts for airlines, tour operators, governments, companies and individuals

The extended-fuselage member of Airbus’ A330neo product line – the A330-900 – can accommodate between 260 and 300 seats in a typical three-class layout or up to 440 for high-density configurations. Incorporating the latest-generation Rolls-Royce Trent 7000 engines, along with aerodynamic improvements – including new composite Sharklet wingtip devices – as well as increased lift and reduced drag, the A330neo is a more efficient aircraft that will generate savings through reduced fuel burn. Operators of Airbus’ A330neo – which is comprised of two versions, the A330-800 and A330-900 – benefit from up to 1,500 nautical miles of additional range, as well as reductions in fuel burn and maintenance costs. Built on the same dimensions as the Airbus A330-300, the A330-900 version makes for an even more efficient and comfortable aircraft. The first flight of the A330-900 took place in October 2017, kicked off a comprehensive flight test campaign leading up to its Type Certification from the European Union Aviation Safety Agency (EASA) less than one year later. The first delivery, to launch customer TAP Air Portugal, occurred in November 2018. There is currently 54 Airbus A330-900’s in service with twelve airlines and Airbus have received a total of over 300’s orders for this variant.