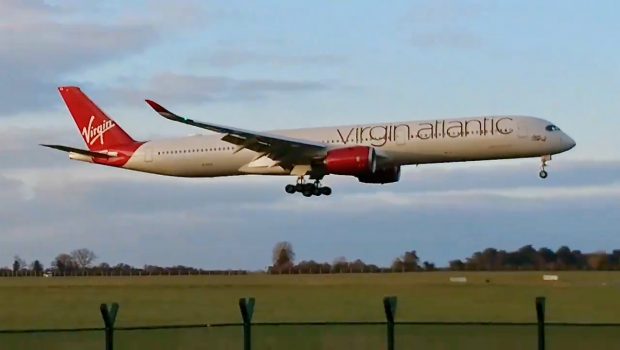 On Friday evening, 5th March, Dublin Airport had its first visit of the Airbus A350-1000. The aircraft was operated on the regular cargo service by Virgin Atlantic arriving after a 50-minute flight from London Heathrow, landing at 17.29. The cargo service has been operated by Virgin since last May carrying cargo only on the service from the Virgin international network. The service is usually operated by their Boeing 787 Dreamliner but their new Airbus operated the service on Friday evening, the first time the extended Airbus A350-1000 has visited Dublin. Qatar Airways operated the first commercial A350 flight to Dublin with the -900 version when they started service to Dublin back in June 2016. Qatar Airways were the launch customer for the Airbus A350-1000. Airbus also brought one of their test aircraft to Dublin on a publicity visit in July 2015. Ethiopian Airlines have also operated their A350-900 on some flights that have used Dublin for a fuel stopover on their transatlantic services.

To date, Virgin has received seven Airbus A350-1000’s to their fleet with the first one delivered last August and the aircraft that visited Dublin, G-VTEA (c/n 426) was the latest to be delivered last November.