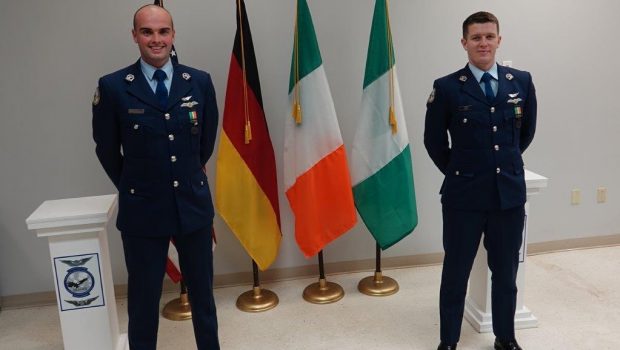 Speaking in the Dáil when the pilots departed to the United States to begin their training with the US Army, Minister for Foreign Affairs and Defence Simon Coveney said, “The purpose of this initiative is to improve capacity for training pilots in the Air Corps with the aim of returning pilot strength to full establishment.”

Both officers commenced their course in August 2020 with 54 classmates including eleven international students. After flying 120hrs on the Eurocopter UH-72 Lakota helicopter, 19 Academic exams & 6 flight line check rides, both Irish students topped their class rankings achieving 1st and 2nd in their section.

The Eurocopter UH-72 Lakota is a twin-engine helicopter with a single, four-bladed main rotor. The UH-72 is a militarised version of the Eurocopter EC-145. The US Army and Army National Guard operate around 400 of these helicopters and it performs logistics and support missions within the US for homeland security, disaster response missions, and medical evacuations.

The two pilots will now return to Ireland and after their period of quarantine begin their operational careers with 302 Squadron flying the Eurocopter EC135 in Baldonnel.