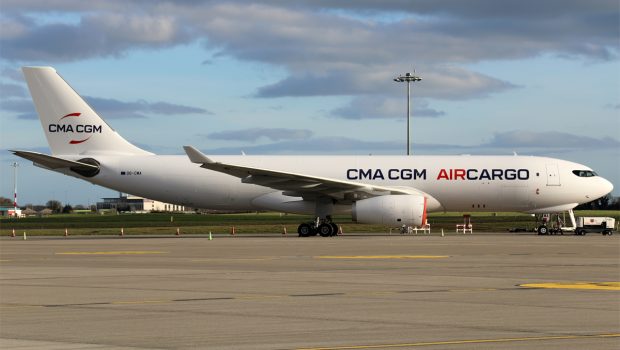 Belgian charter airline Air Belgium are to receive their first dedicate cargo aircraft this week following painting with International Aircraft Coatings (IAC) at Dublin Airport. The aircraft, an Airbus A330F registered OO-CMA was formerly operated by Qatar Airways Cargo since 2015. The aircraft was ferried from Doha – Brussels – Dublin on 11th February for painting in the colours of CMA CGM Air Cargo. CMA CGM is a French container transport and shipping company. The name is an acronym of two predecessor companies, Compagnie Maritime d’Affrètement (CMA) and Compagnie Générale Maritime (CGM), which translate as ‘Maritime Freighting Company’ and ‘General Maritime Company’.

CMA CGM has chosen Air Belgium to operate the cargo service from Leige Airport starting with a regular service to Chicago starting on 8th March with the second aircraft joining for service to the US on 16th March. The second aircraft which is also a former Qatar Cargo Airways machine is currently getting painted by IAC in Dublin. Up to four more aircraft will join the fleet this year.

Air Belgium started operations in 2018 from Brussels-Charleroi using Airbus A340 aircraft on routes to the Caribbean, Hong Kong and Mauritius. They have since focused on charter operations. Speaking on the new venture, CEO of Air Belgium, Niky Terzakis said, “In such an uncertain period, this is good news for the airline. We are delighted to be able to begin this diversification into the commercial and cargo sector, which my team and I know well. This will complement our existing passenger business which has been severely impacted by the current travel restrictions. This demonstrates once again the resilience and flexibility of our airline’s development potential. As well as the ever-growing attractiveness of Liege Airport.”