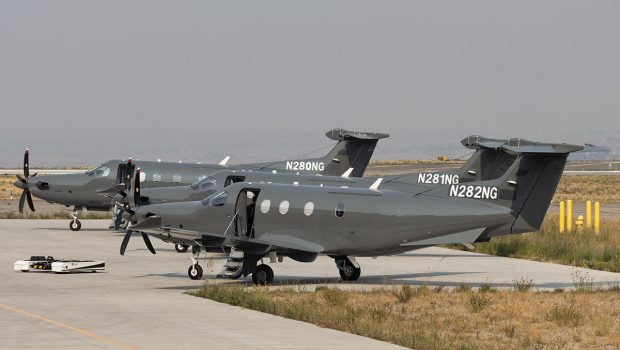 The Irish Air Corps are expected to take delivery of three new Pilatus PC-12 Spectre aircraft later this week. The three aircraft have been based at the Pilatus facility located at Rocky Mountain Metropolitan Airport outside Denver, Colorado since February 2019. They were delivered here from the Pilatus factory in Switzerland to be fitted out with their mission equipment and testing.

The three aircraft took off within minutes of each other yesterday from their temporary home heading for Burlington, Vermont where they landed after a flight of almost five hours. Following an overnight stop they continued on to Goose Bay in Newfoundland for another overnight stop off before the Atlantic crossing. They are scheduled to continue on to Iceland on Wednesday and then make the final journey to their new home in Baldonnel on Thursday. The three aircraft have been carrying US civil registrations for the duration of the time while in Colorado. N280NG, N281NG and N282NG are the markings and they were expected to take up 280, 281 and 282 respectively on arrival with the Irish Air Corps. However, with the acquisition of an extra Pilatus PC-12, 280, last April, this will now mean one aircraft will become 283.

The contract for the new PC-12’s was signed in 2017 and initially, two of the aircraft were due for delivery in 2019, but some delays in the US and then the COVID-19 pandemic caused further delays. The new aircraft will spend its first few weeks undergoing extensive testing and crew familiarisation flights prior to entering full active service. The aircraft are equipped for ISTAR (Intelligence, Surveillance, Target Acquisition and Reconnaissance). On arrival in Baldonnel, the aircraft will take up the Irish markings and the Air Corps roundel will be added to the colour scheme.