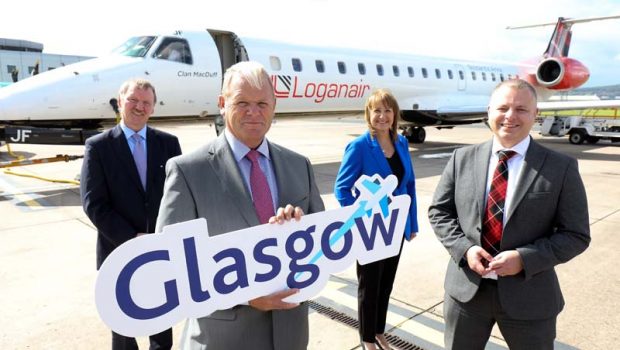 Business leaders from Glasgow and Belfast applauded the launch of Loganair’s new service between the two cities on Friday. The inaugural flight LM485 operated by Embraer ERJ-145 G-SAJF departed Glasgow at 13:20 for the 27 minute flight to Belfast. Glasgow Chamber of Commerce chief executive Stuart Patrick crossed the Irish Sea on the first flight from his city’s airport and was greeted at George Best Belfast City Airport by Northern Ireland Chamber of Commerce and Industry chief executive Ann McGregor. Also on the first flight were Loganair chief executive Jonathan Hinkles and chief commercial officer Kay Ryan.

Stuart Patrick said: “Connectivity and resilience are important for every city during the present crisis and beyond. This new route from Loganair provides both for Glasgow and Belfast. There are many business connections between the two cities and this service will be invaluable for the companies involved.”

Ann McGregor said: “Northern Ireland’s economy relies heavily on good connectivity to both near and far markets. Today’s announcement is important because maintaining and indeed growing the number of routes from our airports will be key for economic recovery.

“We very much welcome the introduction of this Belfast to Glasgow service, which will help facilitate easy commercial travel between the two cities. Businesses across Northern Ireland already enjoy strong working relationships with customers and partners in Scotland and this service will go some way to ensuring that this can continue in the crucial months ahead

The service, a double daily Monday to Friday and on Sundays with a single flight on Saturdays, operates using a 49-seat Embraer 145 regional jet. The weekday timetable from Monday through Thursday has departures from Glasgow at 07.15 and 16.00 and from Belfast at 08.30 and 17.15 – allowing for business meetings to take place in either city before a return flight home.

On Fridays the first flight from Glasgow is at 13.15, leaving Belfast at 14.40, with the Sunday departure from Glasgow at 12.45 and 18.30 and from Belfast at 14.05 and 19.50. The Saturday flight repeats the same departure times as the first flight midweek. With this new service, Loganair becomes one of the largest airlines at Belfast City, from where it flew the very first passenger flight on 7th February 1983 on the day of the airport’s official opening. The Glasgow-based airline already flies from Belfast City to Aberdeen and Inverness, and a service to Dundee starts on 18th September.

Loganair’s Chief Commercial Officer Kay Ryan said: “Our expansion at Belfast City Airport is part of a comprehensive plan to re-connect the UK regions as the recovery from the COVID-19 pandemic begins through all walks of life. It has been our privilege to continue serving essential routes, and we are excited to be linking Belfast City with Scotland.